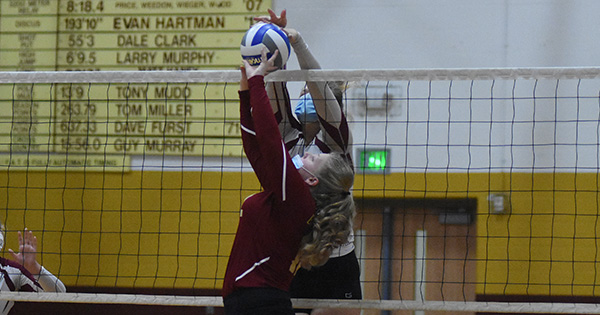 NILES — After a slow start, the Brandywine volleyball team rallied to beat arch rival Buchanan 3-1, in an early key BCS Athletic Conference clash in the Bobcat Den on Wednesday.

Visiting Niles remained undefeated in the BCS with a 3-1 win over South Haven.

Brandywine coach Ray Prestley said that while he could make excuses for his team, it really all came down to execution.

“At the end of the day, we did not take care of the small things we need to take care of,” he said. “We had quite a few minor things like letting the ball hit the floor and nobody going after it and serving. At one point and time, we had nine net violations against us and zero against them. But those are the things we can control. We are not taking control of that part of our game.”

Prestley said that if his team just takes care of the things that it can control, it will be another successful season.

When asked what the difference between the first two and the final three sets was, Bobcat senior Kristen Alvord said it was playing like a team.

“I feel like we all came together more,” she said. “We talked about it, and we all really did not want to lose this. I think Buchanan came out strong because we have beaten the last three years that I have played against them. This is a big rivalry.”

Josie West and Faith Carson led Buchanan in kills with nine each. Carson also had a block. Hailey Jonatzke had a team-high six digs, and Katie Schau 5, while Kylie Boller led the Bucks with four blocks. Claire Shelton finished the match with 28 assists.

The loss was the first of the season for Buchanan in three matches. The Bucks are 1-1 in BCS play.

Brandywine will travel to South Haven for another BCS match on Wednesday. Buchanan will travel to Portage to compete in the Huskie Invitational on Saturday.

The Vikings won the opening two sets against the Rams 25-21 and 25-13 before South Haven rallied to take the third set 25-21. Niles finished off the win with a 25-22 victory in the fourth set.

“We are still trying to get in a groove as a team in specific lineups and rotations,” said Niles coach Jenny Nate. “We are still making quite a few substitutions in order to find chemistry and confidence on the court needed to be able to consistently control the runs and always be the aggressor in every set every point. We were pleased with the win and also know we have a lot of work to do moving forward. We have to build more consistency across the board and continue to work on aggressive play offensively and defensively.”

The Vikings head to Battle Creek this Saturday to compete in a quad at Lakeview High School.

EAU CLAIRE — A better effort by the Dowagiac golf team did not turn out to improve the Chieftains’ finish... read more