Rangers getting better each time; Dowagiac improves to 3-0 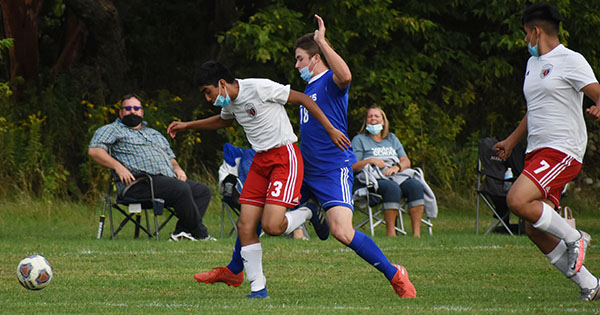 Zachary Friske had one of the two Ranger goals on Monday. (Leader photo/SCOTT NOVAK)

CASSOPOLIS — The early schedule has not been kind to a Cassopolis soccer team that lost six starters from last season.

The Rangers dropped their second straight Southwest 10 Conference match despite a late flurry of goals on Monday.

Visiting Bloomingdale had built up a 3-0 advantage on Cassopolis when the Rangers finally found the net’s back for the first time in 2020. Two goals in the final four minutes were not enough to overtake the Cardinals.

“We have started our first two games of the season against strong opponents who move the ball well,” said Cassopolis coach Austin Francis. “With losing six key starters from last season, our guys are still trying to figure out new roles and it is taking a bit more time than expected.”

Bloomingdale grabbed a 2-0 halftime lead, which it extended to 3-0 midway through the final 40 minutes of the match.

The Rangers’ Zachary Friske cut the lead to 3-1 with 4:07 remaining in the match before Jaren Waldschmidt made it 3-2 with 2:41 remaining. Cassopolis would get one last crack at squaring the match at 3-3, but a shot with 45 seconds left was corralled by the Cardinals’ keeper to protect the win.

Francis saw some good things against Bloomingdale — things upon which his team can build on moving forward.

“Positives from the Bloomingdale game is that we didn’t lose for lack of chances or opportunities,” he said. “We had good shots on goal, and their keeper played well for most of the game. I was really happy to see us play the full 80 minutes and come close to pulling out the comeback in the end. Also, it was great to see Blake Hartsell, a freshman keeper, come off the bench at the half with no warm up time and make some huge saves in his varsity debut.”

The Rangers managed just four shots on goal in the contest.

The Chieftains, 3-0 overall and 2-0 in league play, scored a hard-fought 3-2 in over the Wildcats according to coach Mike Williams.

“Very physical game, and it is going to get tougher as we go through conference,” he said.

Dowagiac led 2-0 at halftime on goals by the Weller twins. Cole Weller scored on a penalty kick, while Henry Weller scored off an assist by Gustavo Cruz.

Dowagiac had an own goal in the final 40 minutes, while Brayden Selent had the other goal for Three Rivers.

Dowagiac’s final goal came off the foot of Isaac Saavedra.

The Chieftains outshot the Wildcats 15-10.