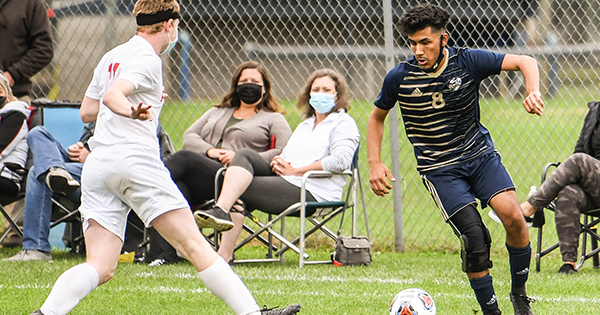 The Niles soccer team split a pair of matches at the Caveman Classic in Mishawaka on Saturday. (Leader file photo)

MISHAWAKA, Ind. — The Niles soccer team split a pair of matches at the Caveman Classic hosted by Mishawaka High School on Saturday.

The Vikings dropped a 2-0 decision to South Bend Riley in its first match, but rallied to blank South Bend Clay in the second match 7-0.

“We came out eager to play, but we made a few mistakes early in the game to put us down a couple goals,” said Niles coach Abel Fonseca.

Against Clay, Dom Thornton had a hat trick, while Cade Vota and Andrews Ntsiful both had a pair of goals. Kyle Bruckner finished with a pair of assists. Also picking up assists were Gustavo Stivalet, Ntsiful, Oliver Williams and Thornton.

“This game showed what we are capable of when all the pieces come together like they should,” Fonseca said.

SOUTH HAVEN — The Dowagiac JV soccer team went 1-1 to win the South Haven Shootout based on a tiebreaker... read more