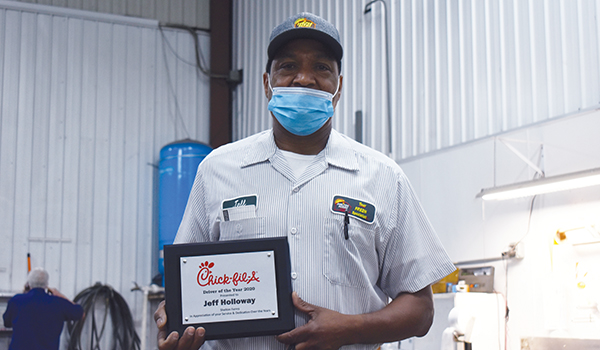 NILES — On Monday, a produce driver for Shelton’s Farm Market walked into the back room of the wholesale warehouse to participate in what he thought was a training video. He was greeted by his peers in the back room. They made causal conversation before he realized what he was summoned to the common space for. To his surprise, the training video turned out to be an awards ceremony honoring him and his work.

Jeff Holloway, of Niles, was awarded the 2020 Chick-Fil-A National Driver of the Year, surrounded by about 15 of his coworkers, bosses and friends at Shelton’s Farm Market.

As Nick Shelton, fruit peddler and mayor of Niles, turned on the sound to the monitors in the room, Holloway was addressed by Chick-Fil-A representatives and workers thanking him, and was presented his awards. The event was a highlight in Niles to start National Truck Driver Appreciation Week in the U.S.

Mike Shelton, president at Shelton’s Farm Market, presented Holloway with a plaque recognizing him as the Chick-Fil-A Driver of the Year, a swag bag of gifts from Chick-Fil-A, and a gift card from the businesses for his achievement.

“Jeff checked all the boxes,” Shelton said, as he turned to Holloway. “You’re also a really nice person.”

The words garnered applause from those in attendance.

“He is always kind. He is always respectful. He is a friendly gentleman,” Shelton said. “Jeff is right there on the front line, and he represents Shelton’s.”

“There are so many amazing stories about the services you provide our restaurants day in and day out,” Coppage said. “It’s a hard job, and you do a tremendous job for us.”

He then presented a video of workers from Chick-Fil-A thanking Holloway personally for his work, kindness and acts of service.
According to Mike Shelton, the process for choosing the winner of the award took into account around 1,500 drivers across the U.S. from produce and food delivery partners that work with Chick-Fil-A restaurants, like Shelton’s Farm Market.

“We’re really proud of you,” he said. “Thank you for being an outstanding representation of Shelton’s.”

Holloway was surprised by the recognition he received. Holding onto his unexpected gifts and prizes, he was smiling behind his facemask.

Holloway said he had been driving for Shelton’s Farms for a little more than six years.

“I’ve been driving for some years,” Holloway said. “I’ve never received anything like this.”

LANSING — In an effort to provide accurate and timely information about COVID-19 in Michigan schools, the Michigan Department of... read more