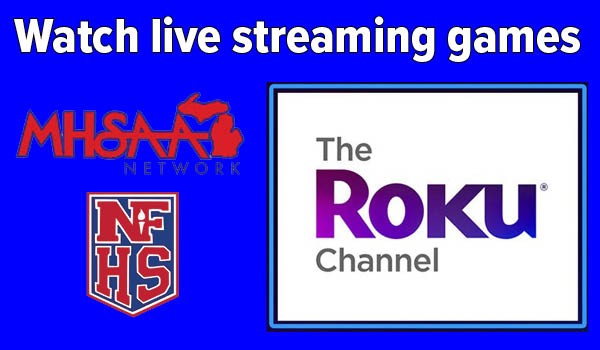 EAST LANSING — The excitement of high school sports hits living rooms this fall as the NFHS Network has released a Roku channel, joining the availability of games on computers and handheld devices.

Nearly 600 events fill the coming week’s schedule for the NFHS Network and MHSAA.TV, as football joins the boys soccer and girls volleyball activity.

More games than ever before will be available online beginning this season, with approximately 270 MHSAA member schools taking part in the School Broadcast Program with Pixellots units being installed at their athletic facilities or schools still producing games using traditional, hands-on student crews.

Pixellot is the NFHS Network’s automated production solution. Nearly 500 Pixellot units are already installed or about to be installed in high school stadiums and gymnasiums around the state. The NFHS Network has been offering schools up to two free Pixellot units since early July — with the schools only needing to cover the installation costs.

Additionally, MHSAA regulations regarding live video broadcasts and streaming have been relaxed during the pandemic to allow schools to use their choice of means to distribute games to fans who are unable to attend because of government-imposed spectator limits. Third-party broadcasters — like local television stations and cable television outlets — are also allowed to originate games live.

In the coming week, nearly 275 varsity events will be available on the NFHS Network/MHSAA.TV. Monthly subscriptions are $10.99.

NILES — Here is the composite sports schedule for Brandywine, Buchanan, Cassopolis, Dowagiac, Edwardsburg and Niles for the week of... read more