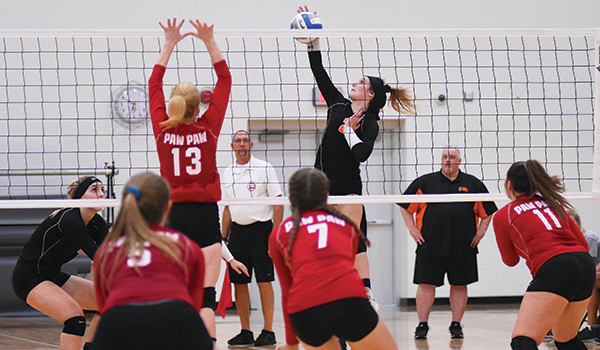 The Dowagiac volleyball team was swept by South Haven and Bangor in its season opener. (Leader file photo)

For the Chieftains, it was the first time they had played in a gymnasium. Dowagiac had been practicing outdoors on grass while awaiting word from the Michigan High School Athletic Association and the state of Michigan governor’s office on when they could move indoors.

Dowagiac coach Tony Hooley was not sure how things would go Wednesday night.

“It was hard to really know what to expect, being in the gym for the first time this season,” he said. “It was a little rough, but I also saw some very good things at times. The performance tonight came from Allie Conner, who was outstanding on defense and in serve-receive. Allie, along with Caleigh Wimberley and Megan Davis, showed signs of how they can control the floor with stellar defense and solid passing.”

Connor finished with a team-high 16 digs, while Wimberley led Dowagiac with five kills and 14 digs. The Chieftains also got five kills and six digs from Davis.

Hooley said a shaky start against the Rams makes it tough to see just how well his team passed the ball. The same was true about the last set against the Vikings.

“We gave away a lot of points on hitting and serving errors,” he said. “I thought we might struggle at the net because, despite our best efforts, we had a hard time keeping our outside practice net from sagging too low in the middle. Mostly though, tonight is on me. I didn’t have them ready for competition. We will get there quickly though. This is a nice and very talented team.”

Jessie Hulett had 13 assists to lead the Chieftains, as well as, six digs and two aces. Davis finished with six digs and five kills.

BUCHANAN — A goal in each half gave host Buchanan a 2-1 BCS Athletic Conference victory in the season opener... read more