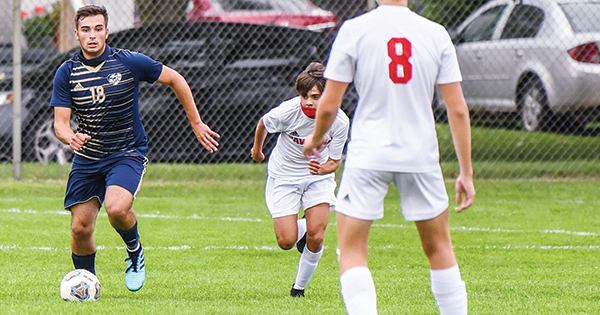 BUCHANAN — A goal in each half gave host Buchanan a 2-1 BCS Athletic Conference victory in the season opener for both schools on Wednesday.

Scoring for the Bucks were junior Logan Grwinski and freshman Britain Philip.

“Our team is really excited to get a win in our first game,” said Buchanan coach Russell Philip. “We are really glad to finally be able to play.”

Bridgman scored its goal in the second half on a penalty kick.

Philip is excited about the prospects for the Bucks in 2020.

“We are a young team, but we are looking forward to having a great season,” he said.

NILES — Visiting Paw Paw scored three first-half goals as it defeated Niles 4-2 in a non-conference match. It was the first match of the year for both teams.

Paw Paw scored an own goal for the lone Viking tally of the opening 40 minutes of play.

Cade Vota scored a second-half goal for Niles on a header off a corner kick by Dohm Thornton.

“First game jitters leads to season opener loss against Paw Paw,” said Niles coach Abel Fonseca. “We had opportunities we didn’t capitalize on, and they [Paw Paw] did in our loss.”

DOWAGIAC — After a scoreless 40 minutes of play in its Wolverine Conference opener, the Dowagiac soccer team scored twice in the second half to pull out a 2-0 win over visiting Vicksburg on Thursday.

The Chieftains, who outshot the Bulldogs 9-4, got its first goal from Noah Green off an assist from Cole Weller in the 50th minute.

Weller would pick up the assist on the second goal, which came in the 55th minute, off the foot of Noe Beltran.

Veteran Dowagiac coach Mike Williams said the two teams were similar. Better execution in the second half led to the Chieftains improving to 2-0 overall and 1-0 in conference play.

“This was an evenly matched game, and we were unable to put it all together in the first half,” he said. “Second half, we moved better as a team and were able to keep more offensive pressure on Vicksburg, which resulted in more shots and goals.”

Dowagiac is back in action on Monday as it travels to Three Rivers for another Wolverine Conference match.