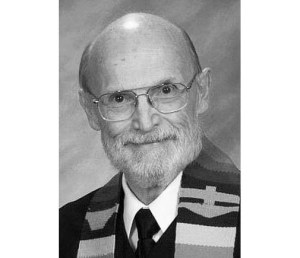 Harry graduated from Scott High School in Toledo, class of 1959. He received a B.A. degree in religion and philosophy at Muskingum University in 1964 and a master of divinity degree in 1967 from Louisville Presbyterian Theological Seminary.

Rev. Harry Clark served a number of congregations throughout his career, both full- and part-time and located in Ohio, Michigan, Illinois and Pennsylvania. Most of them were Presbyterian (USA). He also enjoyed serving a Community Church in Gurnee, Illinois, and several churches, mostly in Pennsylvania, belonging to the United Church of Christ.

Since he retired, he was active in the First Presbyterian Church of Niles. High points in more than 50 years of ministry were the baptism of his own children, the counseling of couples about to be married and the planning of meaningful services of worship.

Harry always enjoyed singing and spent a number of years contributing his strong baritone voice to a community chorus when he and his wife lived in Pennsylvania, including singing with them on a European tour.

He was an avid sports fan, watching football, baseball and basketball. Harry also enjoyed camping with his family and was an expert at planning their annual vacations. He was a gifted photographer, turning thousands of slides into memorable productions, most of them with appropriate musical accompaniment, for the enjoyment of family and friends.

Harry always had a soft spot in his heart for animals, especially those who had no permanent homes. His last dog and cat were adopted from area animal rescue organizations.

After his retirement, Harry volunteered for Spectrum Health Lakeland Hospital, in Niles, helping wherever needed. Harry was not a man to sit idle, but all his busy life made family time a top priority.

In addition to his parents, Harry is preceded in death by his brother, Dennis Clark.

He is survived by his loving wife, Nancy, of more than 54 years; a daughter, Sarah E. (Peter) Young, of Moore, Oklahoma; a son, Andrew R. Clark, of Brighton, Massachusetts; and two grandchildren, Nicholas and Amelia Young, both of Oklahoma.

Due to the current, unprecedented guidelines limiting public gatherings because of the COVID-19 virus, a public celebration of life service will take place at the First Presbyterian Church at a later date. A private interment will be held at Silverbrook Cemetery.

Memorial contributions may be made in his memory to the Michigan Humane Society (michiganhumane.org).

Condolences and memories may be shared with his family at BrownFuneralHomeNiles.com.

The family of Rev. Harry Clark is being cared for by Brown Funeral Home & Cremation Services, Niles.

Rev. Harry Lee Clark will be fondly remembered for his service to God, his family and his community.