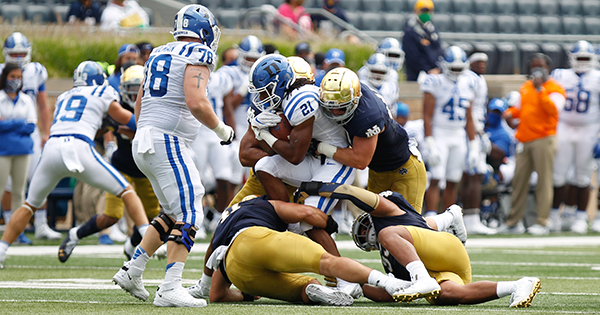 NOTRE DAME, Ind. — Despite all the twists and turns, the Notre Dame Fighting Irish and Duke Blue Devils kicked off the 2020 season on Saturday in front of 10,097 fans.

Notre Dame (1-0) got off to a slow start, but finally found enough rhythm on offense to post a 27-13 win over Duke in its first game as an official member of the ACC.

The Fighting Irish finished the game with 430 yards of total offense, including 263 through the air as veteran quarterback Ian Book was 19-of-31 with a touchdown and an interception.

Kyren Williams had a pair of receptions good for 93 yards, while Tommy Tremble had five catches for 38 yards.

Williams also rushed for 112 yards on 19 carries with two touchdowns.

Notre Dame Head Coach Brian Kelly, whose contraction extension through 2024 was announced near the end of the first quarter, said that Williams did something no one at Notre Dame has done in 25 years.

“So, I mean, from that perspective, you know, receiving over 90 yards. Receiving over 90, pretty good opener for him,” he said. “There’s a lot that he can build off of this, certainly.”

Duke meanwhile, had 328 yards of total offense, include 259 yards passing as Clemson transfer quarterback Chase Brice was 20-of-37. Brice had a rushing touchdown. Eli Pancol had three receptions for 78 yards.

Duke got a pair of field goals from new kicker Charlie Ham. His first of 29 yards gave the Blue Devils a 3-0 first-quarter lead on Notre Dame. He also connected from 30 yards before halftime, which cut the Fighting Irish advantage to 7-6.

Kelly was not surprised by the slow start his team had given the situation they have been in since last spring.

Look, it’s difficult to duplicate game-like speed when you haven’t had that for such a long time,” he said. “So, my expectations are that it was going to be a process that we just had to be patient, and you saw we were patient and we stuck with what we were doing and we had to make some adjustments at halftime and I thought we looked like the team we should have in the second half after we made some adjustments and settled into some things. I thought we took control of the game in the second half.”

The start of the 2020 Notre Dame football season was nothing to write home about as the Fighting Irish struggled in the opening quarter against visiting Duke and trailed 3-0.

Notre Dame struggled offensively in the opening 15 minutes of play, finishing with only seven yards of total offense.

The Blue Devils, on the other hand, ran up 151 yards of offense and scored the first points of the new season on a 29-yard field goal by Ham with 7:01 to go in the opening quarter.

The Fighting Irish used a fake punt to jump-start its offense. The drive would be capped with a one-yard run by Williams, who hurdled a Duke defender to get into the end zone.

Sharon Gaudreau, 41, of Niles, passed away on Wednesday, July 15, 2020. Arrangements are pending and have been entrusted to... read more