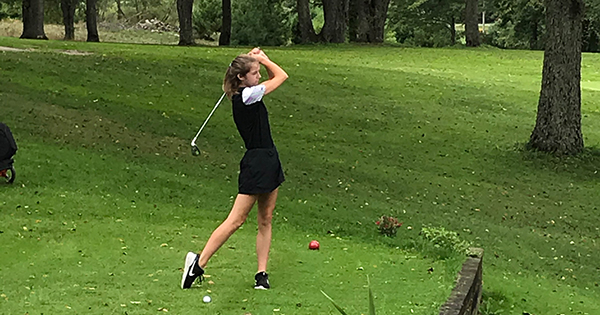 CENTREVILLE — What a difference a year has made for the Dowagiac girls golf team.

The Chieftains were in the thick of the hunt in the Wolverine Conference in 2019 and tied for the league championship, but had to settle for second based on the fifth-person tiebreaker.

Gone from that team are All-Wolverine Conference players Greta Whitaker and Rebecca Franklin.

The Chieftains opened up Wolverine Conference play on Thursday at Island Hills in Centreville where they finished third behind host Sturgis and defending conference champion Plainwell.

The Trojans, led by medalist Cari Sanford’s 41, shot 205 as a team, to edge runner-up Plainwell by two strokes. Dowagiac finished with a team score of 264.

“We are looking forward to next Wednesday at Indian Lake,” said Dowagiac coach Bob Turner. “We should be much more comfortable there.”

THREE RIVERS — The Edwardsburg golf team opened up its second year of Wolverine Conference golf with a third-place finish at the jamboree hosted by Three Rivers on Thursday.

Otsego won the jamboree with a team score of 210, while the Wildcats were second with a 218 and the Eddies third with a 233.

“It was a rough road trip for us,” said Edwardsburg coach Stephen Wright. “We struggled to get anything going off the tee or on the greens. We are still learning and will use this as a learning experience. I look forward to seeing how we rebound next week.”