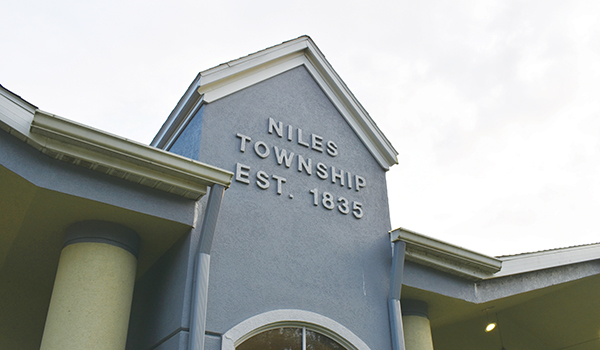 NILES TOWNSHIP — Paying the bills, swapping cleaning services and approving a regular inspection on the water tower were just a few of the agenda items at the Tuesday evening Niles Charter Township board meeting.

Without many items on the agenda, the meeting played host to discussions between board members about an upcoming special public hearing scheduled at 5 p.m. Sept. 21, to discuss millages on the November ballot, as well as improvements to the Southwestern Michigan Community Ambulance Service, and board members, community and roadwork frictions.

After approving a change in cleaning services for the township building, and a regular inspection of the township’s water tower, the board moved onto committee member reports.

Trustee Herschel Hoese discussed a call he had received about a road a resident was concerned about in Oak Manor in the township. The resident had called the Berrien County Road Department, and they had allegedly told them the township was in charge of subdivision roads. The caller had expressed to the township their frustration with wondering where their tax money to the township had gone.

Hoese acknowledged the roads in the township were a challenge, but that he had no control over most of them. Despite that, he said the board had tried to work on improvements that went unrecognized.

“It’s not our job, but to the tune of $1.5 million we have tried to help,” Hoese said. “The Berrien County Road Department needs to  be put on notice that we don’t appreciate the referral that it’s a township problem. We don’t own the roads. We get no revenue for the roads. What we have done, I don’t think it’s fair that we get abused for not taking care of the roads when we have already spent a million and a half dollars that we would not have.”

Other board members agreed the misunderstandings were widespread.

“If we went out there to do roadwork, it’s not our jurisdiction,” Township Treasurer Jim Ringler said. “We couldn’t do road work if we wanted.”

Hoese said people have the misperception the township is not doing its job because the roads are not improved.

Ringler said it was a misunderstanding of how the money flowed and works.

Trustee Chris Vella posed educating the public on what the township can work on.

“[The public] does not understand what we do with the money we are given. They just think we have all this money,” she said. “They’re asking the question, ‘what do you do with all of the tax money?’”

The township is considering putting together new resources on the website to help clarify issues for residents and voters. With the upcoming election in November, the board members agreed it likely would not be feasible until after the election.

The Berrien County Roads Department Director Jason Latham responded to questions on Wednesday. He said the roads in the township are the county road department’s jurisdiction.

“Typically, if there’s an issue, what we would like is for people to send a service request,” Latham said. “You can put in a service request, or if you call us, you can hit ‘1’ and it directs you to the voicemail. We get those every day, and as soon as we log them, the garage foreman is immediately notified.”

Requests like trees down are typically addressed quickly through the week.

“For bigger issues, like a road needing to be redone, we develop a plan to be able to find the most efficient way to do it,” Latham said.

He said that the relationship between the county road department and townships in general can be tense if there is not give-and-take on both ends.

“Townships help to support the road department, but they are not the road professionals,” Latham said.

Another option townships have is to create a special assessment district to generate funding for areas needing more attention, like subdivisions.

However, Latham said even the most trafficked roads still may operate at a loss.

“No road in the state is generating enough revenue to maintain it,” he said.

He said the mill would come out to between $4.50 and $5 per household a month.

In the end, Latham said county employees are the road professionals who take care of the road maintenance and engineering that needs to be done throughout Berrien County.

During the township board meeting, there was also an update on new equipment SMCAS will be utilizing.

“We’re expecting a delivery of a new wheelchair van,” Vella said of SMCAS. “During this time, when people aren’t out and about as much, they want to take something safe to get to a doctor appointment.”
Vella asked the board to see if anyone had come into the township building asking for food resources. She said she had heard about a growing food insecurity in the area, and is hoping to be able to use the township website to connect residents to resources.