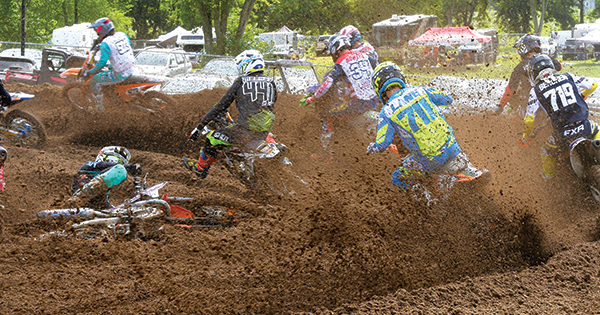 The first-ever Lucas Oil Pro Motocross Championship doubleheader saw a change at the top of the 250cc Class, while in the 450 Class, Zach Osborne continued to dominate. (Leader photo/KELLY SWEENEY)

Shakeup at the top of the standings in 250cc Class

BUCHANAN — There was a shakeup at the top of the Lucas Oil Pro Motocross Championship 250cc stands after a pair of races at iconic RedBud MX in Buchanan over Labor Day weekend.

Ferrandis, who took second on Monday, trails Martin by nine points (216-207) in the points standings. R.J. Hampshire, who won RedBud National II by finishing second and third in the two motos, is a distant third play with 170 points.

For Hampshire, it was his second career victory.

“This one is special,” Hampshire said. “I gave it everything I had, and Dylan [Ferrandis] was just riding so strong at the end of that second moto. I had to make a decision, and I decided to go outside, which didn’t work out. I’ve worked my butt off to get back to this position after the knee injury, and I didn’t want to let this win slip away.”

Zach Osborne continues to lead the 450cc Class as he has 172 points after the two nationals at Buchanan. Marvin Musquin is in second place with 146 points, while Justin Barcia is third with 133 points.

Osborne admitted he was not at his best in the second-half of the first-ever Lucas Oil Pro Motocross Championship doubleheader.

“Today, I just felt a little flat all day,” he said. “To come out ahead of some of my championship rivals was good, and we did damage control. I’m stoked with the day. I didn’t feel as good as I did on Friday, which is something I sort of expected. Overall, I’m happy with the day.”