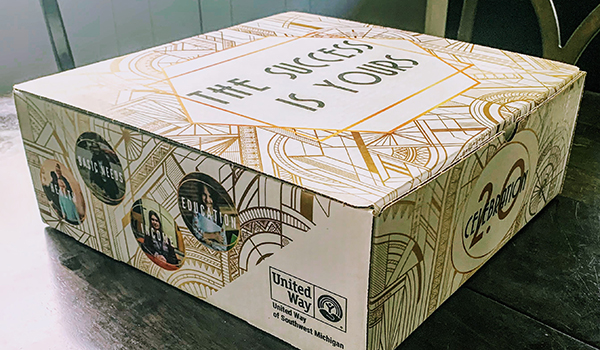 SOUTHWEST MICHIGAN — Because its annual celebration of community contributions, originally planned for March, was canceled due to the pandemic, United Way of Southwest Michigan showed its appreciation in creative contactless fashion.

Originally scheduled to have been hosted on March 19 at Lake Michigan College, United Way of Southwest Michigan’s annual celebration took a different form. United Way crafted a unique experience to acknowledge the generosity of donors and the impact made in the community in 2019. On Aug. 27, United Way staff delivered stunning “Celebration 2.0” boxes to award winners. The Hollywood-esque boxes, designed in a glamorous Roaring ‘20s style, contained success stories that would have been premiered at Celebration, awards celebrating the winners and other goodies.

Award winners were encouraged to photograph or video themselves unpacking the box and upload them to social media, tagging UWSM and using the hashtag #uwsmcelebration so everyone in the community can see, officials said.

“When you look at the example of this year’s award winners — the outstanding corporate partners and the stellar individuals — about how to step up and lead, commit with passion and determination, and overcome obstacles to advance the common good, nothing could stop us from finding ways to acknowledge them for it,” said Anna Murphy, president and CEO of United Way of Southwest Michigan. “2019 was a banner year. We saw how strong and caring our community is — and that is getting us through the difficult year we’re currently in.”

The event was to be hosted by Jonny Reinhardt and Matt Malone of 97.5 Y-Country, who reprised their roles from last year with more hilarious misadventures getting to the venue, which were captured on video for the audience to watch. Instead, the video will be available on UWSM’s YouTube channel and shared on its other social channels.

“The work we do is hard, and we are so proud to showcase to the community all that they help us to accomplish,” Murphy said. “We have so much from the past year to celebrate and we look forward to the recovery and resiliency we are working to create in our region.”

As the largest non-governmental funder of health and human services in the southwest Michigan community, United Way of Southwest Michigan stewards millions of dollars and tens of thousands of volunteer hours every year, officials said.

The many organizations and individuals who helped make 2019 a success were recognized with the following awards:

BUCHANAN — There was a shakeup at the top of the Lucas Oil Pro Motocross Championship 250cc stands after a... read more