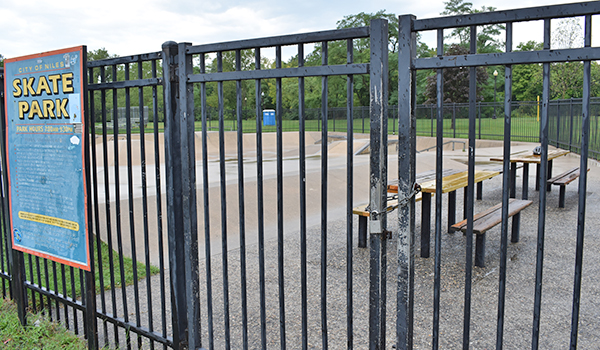 NILES — A familiar lock and chain was back on the entry for the Niles skate park Tuesday morning.

Overnight between Friday and Saturday, vandals struck the Niles Skate Park once again.

Black, spray-painted graffiti was found on the concrete ramps and sides of the bowls once again just less than two weeks after city officials volunteered their time to clean and repair the park from the last bout of damage. The skatepark was not the only location defaced with graffiti. The Rage, an alley and a bridge were also tagged with similar-looking work.

On Sunday, Mayor Nick Shelton took to Facebook to express his frustration. He encouraged anyone with information on who committed the act to leave an anonymous tip at tipsoft.com or to call the police to report the information.

“Feeling incredibly disappointed in the individuals who think this is okay,” Shelton said in his post. “You will be caught and prosecuted to the highest extent of the law.”

Kevin Brazo runs the Niles Michigan Skatepark Facebook page, which originally posted photos of the graffiti in a post reading, “whoever did this, we will find out who you are, and you will be dealt with.”

Brazo does not believe the person or people defacing the park are ones who are utilizing it for skating.

“The same people tagged the alley,” Brazo said. “East side park and the [Main street] bridge were also tagged.”

Brazo has been involved with the skate park since before it was built.

“I joined the parks board years ago to help get this park built. I was in my 20s at the time, and I skated,” he said. “I still do a little. I was kind of the go-between between the younger people that skate and the older people that we had to convince to let us build this thing.”

On Tuesday, he again said he was disappointed, “especially after so many hours were put in by city staff to clean it.”

By Monday, City Administrator Ric Huff reported there would be a meeting to discuss the city’s next steps with the skate park.

“In the past, locking up the park has worked, and might still work,” Huff said. “The people who want to use the park for its intended purpose get tired of not having access and eventually report the offenders.”

Shelton said the conversation of security cameras being installed has continued.

“There have been a couple of businesses and individuals who have offered to help with surveillance equipment, which I appreciate,” he said. “I think we need to make sure that the equipment ties in with our existing software and system.”

Shelton also said the approach needed to be realistic, as city officials cannot monitor the footage all day.

“Cameras would help us to go back and see if we can find clues about who is vandalizing the park, but I believe it will be difficult to actually identify an individual from the footage,” Shelton said. “I don’t think cameras will hurt, but I am not sure how much they will help either.”

“I know that skate culture and graffiti go hand in hand,” Shelton said. “Graffiti is a form of expression, art, rebellion, etc. I get it. My only concern is that if we were to open up the skate park to graffiti, we would get it, but it might not be what we want.”

He worries that opening up an area to allow graffiti, that the artwork would also be open to vandalism, or those defacing property could find another property to deface.

SOUTHWEST MICHIGAN — Because its annual celebration of community contributions, originally planned for March, was canceled due to the pandemic,... read more