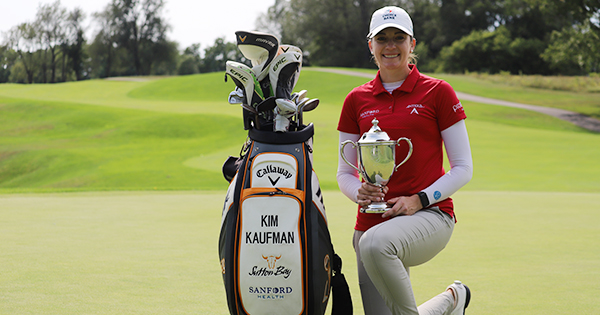 Bailey Tardy was two strokes farther back to finish third.

“It felt awesome, it’s been five or six years since my last win, so kind of feels like my first one all over again,” Kaufman said. “It was tough out there today and competition gets better and better, so we were just super happy to stick to our game plan and have it work out useful. I feel like finally I did what I’ve been trying to do. I just kept the shot that I had in front of me as my only focus and not that at times you aren’t thinking other things, but it paid off today.”

Besides winning the Four Winds title, Kaufman also captured an additional $10,000 to claiming the seventh Potawatomi Cup. Four Winds was the second and final stop for the cup. She finished tied for fourth at the FireKeepers Casino Hotel Championship to put herself in position to claim the title money at Blackthorn.

“The Potawatomi Cup was really the cherry on top of a great week,” said Kaufman. “This tribe does so much for our tour and to see them pitch in for a bonus pool is really incredible. I hope I make them proud as this year’s winner.”

The victory also vaulted Kaufman (Clark, South Dakota) to the top of the Volvik Race for the Card standings. She leads the standings with $37,232 in earnings through five weeks on the tour.