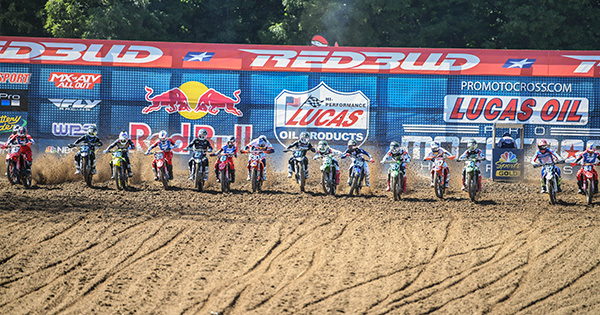 The first of two RedBud Nationals was hosted Friday. The second national is set for Monday afternoon in Buchanan. (Leader photo/EMILY SOBECKI

Task force made it possible to have racing at RedBud

BUCHANAN — A lot of work has gone into preparing RedBud MX for racing this Labor Day weekend.

That work does not include the track preparation for competitors or the work they will be doing to get their machines ready for racing in a pair of Lucas Oil Pro Motocross Championship Series races.

The work began months ago when the COVID-19 pandemic swept across the country, forcing sports of all kinds, including professional motocross, to put their seasons on hold. However, thanks to the efforts of MX Sports, racing started three weeks ago and continues on perhaps the series’ most iconic track in Buchanan this weekend.

RedBud National I was hosted Friday, with the second national set for Monday afternoon. Racing beings at 1 p.m. with the 250cc moto on both days.

Tim Cotter, MX Sports’ pro motocross event director, spearheaded the Safe Racing Task Force, which included more than 40 other members from a variety of race organizers, both two- and four-wheel, the CEO of Daytona International Speedway, medical officials and people who are both motorcycle experts and public health experts. The guidelines that the task force created made it possible to run a pair of races at Loretta Lynn’s Ranch in Hurricane Mills, Tennessee to kick off the season three weeks ago.

“We created this document that taught us all what to do and when to do it,” Cotter said. “It is called the ‘Safe to Race Toolkit.’ The task force pumped that out in about two weeks and then made it available to every race track in America for free just to help everyone to navigate the waters.”

Cotter said the task force then took the highlights from that document and created a health plan that was smaller and easier to read and understand.

The guidelines were created by working with state and local health officials, as well as following recommendations from the Centers for Disease Control and Prevention. Organizers said they looked at everything, from wearing masks to keeping social distancing.

Everyone involved with each event has to be screened for temperature, and the racing facility’s capacity will be limited where fans are permitted.

Unfortunately for local motocross fans, the latter is not an issue as RedBud will be a closed race, which means no fans will be allowed outside of the amateur racers, who are also competing in Buchanan this weekend. They were allowed to purchase tickets to the race as they were already on site and followed all health protocols.

According to Cotter, things have gone pretty much as planned throughout the first three events.

“Things have gone remarkably well, considering the uncertainty of the schedule” he said. “Usually, by now, our season is over. Now, we are really just beginning with three in the books, and then a doubleheader up at RedBud.”

Cotter said that kicking off at Loretta Lynn’s was the perfect spot to begin the 2020 season as the facility has been the home to motocross racing, especially amateur racing, for 39 years.

“We kicked off at Loretta Lynn’s, and there is not a more historical venue in America than Loretta Lynn’s, and it had never hosted a professional motocross race,” Cotter said. “But because of the scheduling, and we were just coming off the amateur national championships, which is the largest amateur motorsports event in the world, I believe, we felt that since our team was there, we would be able to flip that into a pro venue, and do it, on a limited basis.”

Cotter said the first race, outside of it being muddy, went well. During the week leading up to the season opener, MX Sports learned that due to the unrest in the state of Washington, particularly Portland, the second round would have to be moved to another track.

It only made sense to run a second race at Loretta Lynn’s, he said.

“The racing was good,” Cotter said. “We did it with fans, but not many fans. The previous week, we put a cap of 5,000 fans on it, and we sold it out. The second week, not so much. Last week, we were in Crawfordsville, [Indiana] just south of [Buchanan], and we had a great event with fans. We had a cap of 6,000, but we had much less than that.”

Cotter said that now the waiting begins as the next seven to 10 days will decide how it impacted the Hurricane Mills area. Cotter does not expect a negative impact due to the amount of time his team was there to prepare the season opener.

“We were at Loretta Lynn’s for more than a month, and Humphreys County, Tennessee, and there is no indication that we negatively impacted that community in a healthy way. We were fortunate for that,” he said.

Cotter hopes that trend continues throughout the rest of the season.