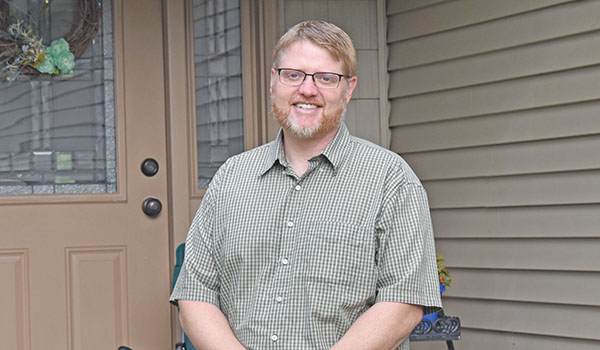 EDWARDSBURG — If you told recent Edwardsburg transplant Nate Starkey a decade ago that he would be standing behind a pulpit each Sunday preaching God’s word, he would not have believed you.

“I never in a million years thought this is what I would be doing,” he said.

Now, he is taking the pulpit at an Edwardsburg church.

Starkey’s path to becoming a pastor is a somewhat nontraditional one. A former construction inspector, Starkey grew up in the United Methodist Church but left after graduating high school.

“Growing up, I did youth group and mission trips and all the churchy things,” he said. “But when I turned 18, I wanted nothing to do with it, mostly because of all the other fun stuff to do out there in the world.”

It would be more than a decade until Starkey would again enter a church. It was not until his wife, Amy, got pregnant with their daughter that he decided to reenter the faith.

“I realized if I was going to raise a child, it was going to be by example, and if I was her example, she was doomed,” he said with a laugh. “I was not on a very good path, so I looked back on my background, and we started church shopping.”

Once Starkey returned to the church, he said his life changed for the better. It was not long before he and his wife started organizing a parents’ group at their church. Soon enough, Starkey began to feel the call to preach. Even though it was never something he thought he would do, and as an introvert does not consider himself a natural public speaker, he said he knew God was calling him to share a message of love.

“Something in that process of going away and doing all the wrong things for a very long time, but still being welcomed back and loved no matter where I’d been and what I’d done drew me in and said I needed to share that message as well,” he said. “A lot of people think you have to be right before you can go into church, but my call is to make sure people know that is not the case. The world needs to know that every person has a place in the kingdom of God and in the church.”

He called his pastoral training to be a “do it yourself” approach. He is currently a locally licensed pastor, which allows him to be a pastor while completing his education. He currently has two courses left in his training.

Many years after his initial call to be a pastor, Starkey said he is happy to have come to Edwardsburg, despite the challenges of taking over a new church during a pandemic.

“Everything at the church has been great so far, but it has been hard to get to know the community with everything going on in the world,” Starkey said. “The biggest challenge is that I haven’t been together with the whole church yet. I’ve only seen glimpses of who the church is, and even less, I’ve only seen a small picture of who the community is.”

Currently, Hope UMC is hosting outdoor services to help prevent the spread of COVID-19. The church is also broadcasting service on 88.3 FM for those who choose to stay in their cars on Sundays.

Starkey said he has personally been taking as many precautions as possible to protect his congregation from COVID-19 and has been looking on the bright side of things. For example, in lieu of larger meetings, he has been hosting more personal, one-on-one sessions with individuals to better get to know his congregants.

“We have a very unique opportunity to embrace everything good, but make changes right now,” he said. “If there is anything that needs to be changed, we can do that.”

Despite current challenges, Starkey said he is looking forward to serving the Edwardsburg community in the future.

EDWARDSBURG — The Edwardsburg Ambulance station has not gone to the dogs — but it has gone to the cats.... read more