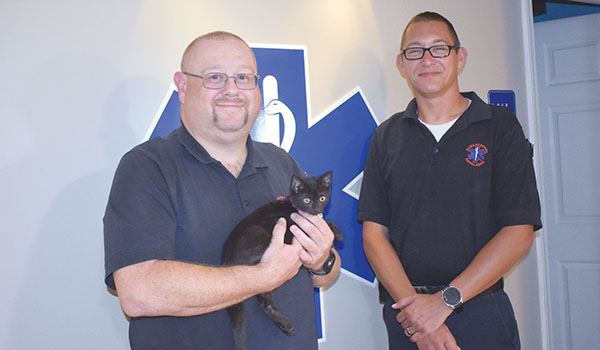 Edwardsburg Ambulance recently welcomed Six, a rescue cat, to live at the station and build morale for its first responders. Pictured with Six are Nathan Hamilton and Erich Gebhard. (Leader photo/SARAH CULTON)

EDWARDSBURG — The Edwardsburg Ambulance station has not gone to the dogs — but it has gone to the cats.

Underneath the breakroom’s TV sits a tall cat tree, while feathered toys are strewn about, all in favor of the agency’s newest employee.

Edwardsburg Ambulance recently welcomed a rescue cat named Six to its ranks. Named for the six toes she has on each foot, the four-legged companion lives at the station and is meant to boost morale and comfort the agency’s first responders, according to administrator Dennis Closson. Six is the first station pet Edwardsburg Ambulance has ever had.

“She’s already made it her home,” Closson said.

Closson said staff had wanted a dog for the station for the entire time he has been administrator, but due to insurance reasons, that was not feasible. However, a cat was possible, and when Closson saw a post on Facebook about an abandoned black kitten in need of a home, he knew Edwardsburg EMS was the place for her.

The two-month-old kitten has been living at the station for about two weeks now and has stolen the hearts and lifted the spirits of Edwardsburg Ambulance employees, Closson said.

“That was the big reason for getting her was morale,” he said. “[Our first responders] all are good-spirited people, but sometimes there are calls that get you down, and it has already made a noticeable difference in a couple of people.”

Two first responders who have already fallen in love with Six are Nathan Hamilton, EMT, and Erich Gebhard, paramedic.

Tuesday, as they waited for a call to come in, Hamilton and Gebhard sat in the office’s breakroom watching as Six darted across the room and giving her pets when she came up to them.

A 19-year paramedic with Edwardsburg Ambulance, Gebhard said he was happy to see the agency gain a furry friend.

Hamilton agreed, adding that Six has already helped lift spirits at the station.

As she continues to get acquainted with her new home and all the first responders at Edwardsburg Ambulance, Closson, Gebhard and Hamilton all said they were looking forward to taking care of Six for years to come.

“In between calls at the station, she gets a lot of attention,” Gebhard said with a smile. “She doesn’t give us much of a choice.”

EDWARDSBURG — Edwardsburg resident Debra Inglefield, 61, did not choose Mippy, her large, long-haired black cat. He chose her. On... read more