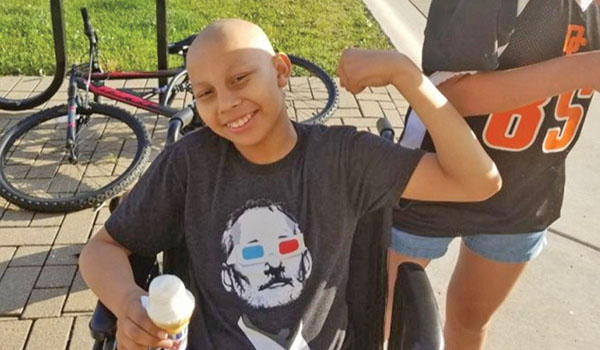 DOWAGIAC — It has been a challenging year for Weski Wesaw.

While most 12-year-olds are playing outside or hanging out with friends, Weski has spent the past five months fighting for his life.

Five months ago, Weski was playing sports at Russom Park when a coach fell on his leg.

Initially diagnosed with a knee sprain, a lump was later discovered on his tibia. After more testing, an X-ray and CAT scan revealed that Weski had osteosarcoma in his tibia.

With Weski’s 12th birthday approaching, Weski’s father, Kyle Wesaw, wanted to make sure his son had a birthday he will not soon forget.

Friends, family and community members will gather to celebrate Weski’s birthday with a ride-by parade at noon Saturday at 27357 Peavine St., on the corner of Dailey Road and Peavine.

The Dowagiac Fire Department, Dowagiac Police Department, and True’s Towing and Recovery will participate in the parade, in addition to sports teams, friends, and teachers and staff from Dowagiac Middle School.

The event was originally scheduled for last weekend to coincide with Weski’s birthday, but had to be rescheduled due to special circumstances.

“It makes me extremely happy that we have people supporting us and that there are people who stand behind us,” Kyle said. “I know [Weski] is thrilled. Due to the pandemic, we are doing a ride-by convoy. If you are able to come, you are more than welcome.”

Osteosarcoma is a type of bone cancer that starts in the cells that form bones. It often occurs in the long bones that make up the arms and legs, but it can occur in any bone. It tends to occur in children and young adults.

The news was tough for Kyle to take in. His sister passed away from the same disease years ago, and his grandpa passed away early this year.

Weski has been undergoing chemotherapy treatment at Memorial Hospital in South Bend. On July 27, he had successful above-the-knee amputation on his right leg.

“He has three types of chemotherapy that he undergoes in three-week rotations,” Kyle said. “Three weeks on chemo, and two weeks off, for four days a week.”

The treatment process is taxing on both the mind and body, but Kyle said he admires his son’s positive attitude. Weski played football, baseball, wrestling and lacrosse growing up, and aims to play sports again someday.

“As we work through these things, he stays positive, and he pushes through,” Kyle said. “He’s really something special. He’s a champ, and he keeps things on the positive side. We brought him home from surgery, and even with one leg, he’s going up and down the stairs. I’m freaking out, but he keeps smiling and pushing along. It’s a lot for him, but he keeps in good spirits.”

A member of the Pokagon Band of Potawatomi Indians, Kyle appreciates the support his family received during the process. Both he and Weski’s mother, Shawna Dillon, started a GoFundMe account to help with medical expenses. More than $12,000 has been donated since the account was created.

“I want to thank everyone, from all of us,” Kyle said. “The thoughts, prayers and positive vibes mean a lot to us. It gives us the energy to keep going. The days are long and the nights are long. I just want him to be happy. With COVID, we don’t see friends and family like we used to. I’m thankful that people are out there supporting us. It’s something that you don’t expect. You feel like you’re all alone but you have your whole community behind you. It’s a beautiful thing.”

DOWAGIAC — Marissa Schoetzow loves to cook food and serve customers. So when the opportunity to purchase Lutz’s Drive In... read more