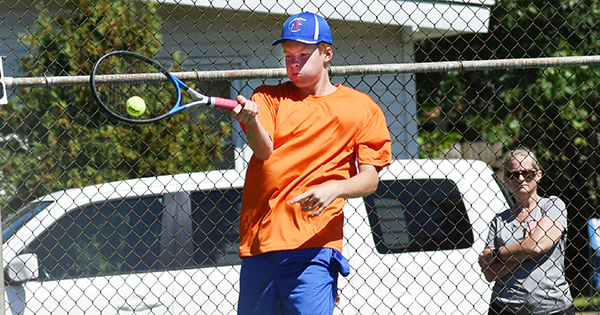 Ethan Emenacker earned the lone victory for the Eddies against Allegan in Wolverine Conference action on Wednesday. (Leader photo/SCOTT NOVAK)

NILES — A sweep of the singles flights helped visiting Buchanan to a 5-3 victory over Niles in BCS Athletic Association boys tennis on Wednesday.

The Bucks, who improved to 2-2 on the year, won three out of the four singles flights in straight sets, dropping just two games in the process.

At No. 1 singles, however, Buchanan’s Thomas Matuszewski needed three sets to defeat the Vikings’ Chase Lotsbaich 6-2, 4-6 and 6-2. That duo played a three-and-a-half-hour match against each other the previous week at the Niles Quad. Matuszewski won that in a tiebreaker.

Buchanan coach Erin Kraty is pleased with the singles players, but knows there is still work to do on the doubles side.

“I think we played pretty well,” she said. “The No. 1 singles match was a fun match to watch as they are evenly matched. [I’m] glad that Thomas Matuszewski pulled out the win. Our singles lineup as a whole is very strong. That is where most of my vets play. Our doubles teams are where we need to work the most. They are all pretty new to tennis and have some work to do, but they love the sport and are willing to put in the time and effort to get better.”

The Vikings won three out of the four doubles flights, winning two in straight sets and the third in a three-set match at the No. 3 slot.

Niles coach Jill Weber shuffled her lineup for the match. The Vikings were 1-3-1 heading into action on Wednesday. She said her team is improving.

“We are making progress for sure,” she said. “The team put in some good practices this week, and we are starting to see the hard work pay off. We are mostly a young team, and they are catching up and excelling.”

The Niles No. 3 and No. 4 doubles teams consisted of freshmen on Wednesday. Both came away with victories.

Host Brandywine improved to 4-0-1 overall and 2-0-1 in BCS Athletic Conference boys tennis with a 7-1 win over Bridgman/New Buffalo/Lake Michigan Catholic on Wednesday.

The Bobcats swept the doubles flights and won three out of the four singles flights.

Jacob Fox, Micah Gamble and Corbin Gamble were all winners in singles action.

The Eddies were defeated by Wolverine Conference powerhouse Allegan 7-1 on Wednesday.