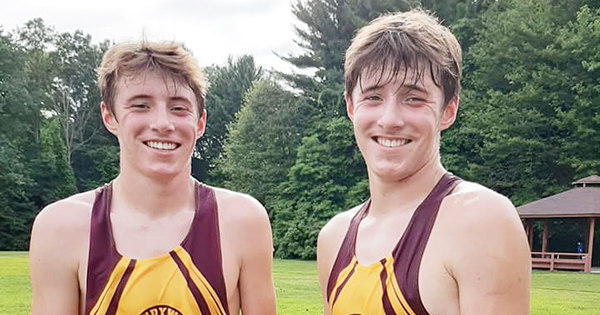 NEW BUFFALO — The Brandywine cross country teams finally opened their season on Wednesday as they competed in and won the New Buffalo Invitational.

The Bobcat boys team, led by Brock Dye’s fourth-place finish and a time of 21:38, finished with 36 points to edge runner-up River Valley, which finished with 39 points. Eau Claire was third with 58 points.

No other schools had enough runners to post a team score.

In the girls’ race, Brandywine got a second-place finish from Allison Lauri, who posted a time of 24:20, as the Bobcats finished with 25 points for the win. River Valley, the only other school to post a team score, finished with 30 points.

Brandywine coach Terry Borr was pleased with his team’s effort, especially for the first race of the season.

“I feel really great for the kids,” he said. “We have put some good work in so far and now that our kids have finally had the experience of actually running in a meet, we hope that we keep getting better and better. It has been nice to have the number of kids out because it makes practice more fun and more competitive. We still hope to add even more kids as we get back into school.”

The Bucks were runners-up in the girls race at St. Joseph against the host Bears and Watervliet. St. Joseph won both the boys and girls races with 28 and 15 points, respectively. Buchanan finished with 51 points in the girls race, while the Bucks had 73 points to finish third in the boys race.

Ryan Young led Buchanan with a sixth-place finish in the boys race with a time of 19:21. Eleanor Young was seventh in the girls race to earn the top spot for the Bucks with a time of 24:15.

A complete list of Brandywine and Buchanan finishers can be found online at leaderpub.com.