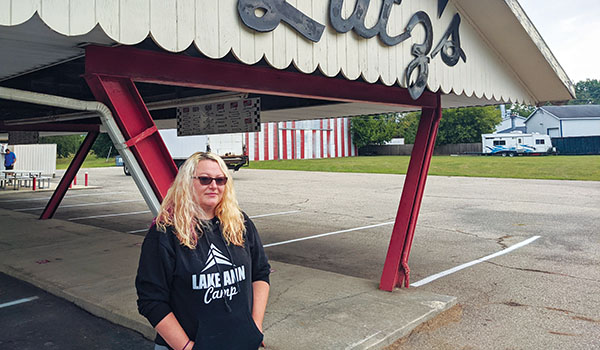 DOWAGIAC — Marissa Schoetzow loves to cook food and serve customers. So when the opportunity to purchase Lutz’s Drive In came up, she could not say no.

Schoetzow, a Hartford resident, has been gearing up to open the longtime Dowagiac fixture for Labor Day weekend.

“We’re excited,” Schoetzow said. “Lutz’s has been a staple for so many people, and we’re happy to bring it back.”

Bob and Virginia Lutz opened the restaurant, 28102 M-152, Dowagiac, in 1961 and served the Dowagiac community until 2017, when Scott Scherer and Karmen Grady bought the restaurant.

In 2019, the restaurant was bought by Matt Wheeler before Schoetzow purchased it on Aug. 4.

“My aunt and I saw this building, and we noticed it was for sale,” she said. “So I thought, you know, why not just take a chance? We came and talked to Bob Lutz, and he saw that we had a lot of heart for this. He’s taking a chance on us, for sure.”

While preparing for opening day, Schoetzow said major renovations were not necessary because of the upkeep Bob Lutz has done with the building.

“The prep has been kind of smooth,” Schoetzow said. “There’s been a lot that I didn’t really know about until I got into this. There’s so much that goes into running a business, but the process has been smooth. Everything has fallen into place. I want to cook because I love cooking. Doing the inside work is fun, but it’s stressful too. The only thing we had to do was update the water testing. Everything here, he kept it up to snuff. We just had to clean it and get it ready for us and how we’re gonna do stuff.”

A team of car hops will serve food to customers in their vehicles. Patrons can also order food at the serving window or by calling in and picking up their orders using the drive-through. Schoetzow said that the indoor seating area is closed for the time being due to the ongoing COVID-19 pandemic, but hopes to open that in a few months.

The new menu will consist of an assortment of items, including pizza, burgers, sandwiches, chicken strips, drinks and sides. The menu will also feature some staples from Bob Lutz himself.

“Bob was here the other day to make his coleslaw, which the people want,” she said. “He’s still around and helping with stuff. The restaurant is going to have his touch as well as our new touch on it.”

It did not take long for Schoetzow to realize which food item would garner the most demand.

“The people want their pizza,” Schoetzow said. “We’re going to get it as close as we can to the original. I don’t think it’s going to be the exact same, but they definitely want their pizza.”

As a first-time owner, Schoetzow said that it is nice that Lutz’s has a passionate fanbase ready and willing to support the restaurant.

Schoetzow created a Facebook page for the restaurant on Aug. 22, and the page already has more than 1,000 likes on Facebook.

“Cooking at [the Acorn Grill], I was so limited in what I had control over,” she said. “We were in the campground, so you didn’t get to see a lot of people. When I made the Facebook page for the restaurant, people from everywhere were saying they were so excited for it to come back. To see Bob excited for it to come back is awesome. [The Lutzes] are really good people. Everybody loves them and knows their food. But it is challenging because people expect the Lutz’s food, and if it’s different, I’m worried about if they’re going to like it or not. But hopefully they give us a chance.”

HOWARD TOWNSHIP — The Cass County Firemen’s Association will be buying new rescue equipment, thanks to the effort of a... read more