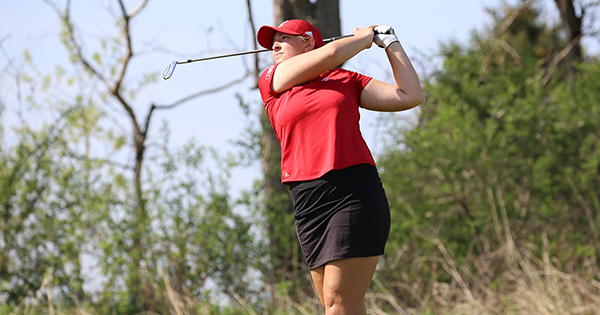 Erin Harper, of Indiana University, will be in the field of 132 golfers on Friday to start the Four Winds Invitational. (Submitted photo)

SOUTH BEND — There will be a distinct Indiana collegiate flavor to the field of the ninth annual Four Winds Invitational at Blackthorn Golf Club this weekend.

Indiana University, Indiana State University and Purdue University will all be represented in the field of 132 golfers for the Symetra Tour stop, which begins at 7:45 a.m. on Friday and runs through Sunday afternoon.

“It’s always fun to come back to Indiana. I have a lot of memories here,” said Harper, who was named Big Ten Championship All-Tournament team her senior year. “I played in this event last year, and I really enjoyed the layout of the course and everyone’s warm hospitality. I’m looking forward to my week back in the Hoosier state.”

Appert and Reto are not the only international players in the field this weekend. A total of 23 countries will be represented. The U.S. leads with 89 players, while Canada and the People’s Republic of Korea are next with five participants.

“I always feel so honored to represent Canada in every event that I play in,” said Maddie Szeryk (Ontario, Canada). “I can feel the love and support from anywhere. “I’m really excited to play at this course again. I have a few good memories from last year, and it’s awesome knowing that two Canadians have won this event [Brooke Henderson (Smiths Falls, Ontario) in 2015 and Nicole Vandermade (Brantford, Ontario) in 2014].”

The 89 Americans competing represent 24 states. Florida leads the way with 14 participants. California is next with 13.

“The Four Winds Invitational has been one of my favorites stops on tour since my rookie year. I’ve had great tournaments both times I’ve played at Blackthorn Golf Club,” said Samantha Wagner(Windermere, Florida), who finished T4 in 2018 and T12 last year in South Bend. “The golf course suits my game well, and I am excited to play here given all the work I’ve done on my swing in the off season. Even though I live in Florida, this tournament and course always feels like coming home because it reminds of playing golf in Pennsylvania when I was younger. I am so grateful that we are able to have this tournament and South Bend is still able to be a part of our season this year.”

There will be a large field of rookies for the tour’s fifth stop of the season. A total of 36 players will be looking to pick up their first professional victory, including Janet Mao, of Johns Creek, Georgia. Mao, a graduate of Northwestern University, has made three out of four cuts so far in 2020. Her best finish was 21st at the IOA Championship.

“Playing in the Midwest does have a little sense of comfort with aspects like the look of the courses and the bent grass that I was around in college,” Mao said. “Playing in the Midwest gives me the opportunity to spend some time in Chicago in the off-weeks after the events to see really close friends, practice with my former teammates, and see my coach, obviously socially distanced nowadays.”

Besides competing for a piece of the $150,000 pursue this weekend, golfers will also be chasing a spot on the LPGA Tour in the Volvik Race for the Card. The Symetra Tour rewards its top players with LPGA Tour memberships each year.

Eight of the top 10 Volvik Race for the Cup leaders are in South Bend this weekend.

Among them will be Anna Redding (Concord, North Carolina), who has made all four cuts this season and stands No. 6 in the current standings. Her best finish in 2020 was runner-up in Beaumont, California.

“I was proud of how my game looked in California. Coming off a tournament where I shot my personal best has not only helped my confidence but achieve my pre-season goal to find myself in the top-10,” she said. “I’m looking forward to competing in the rest of my rookie season, learning more each tournament, and will be working hard to keep my name in the Volvik Race for the Card.”

First and second round action gets under way at 7:45 a.m. The final round will start at 9 a.m. with play beginning from No. 1 and No. 10 tees all three days. Due to Indiana state guidelines for COVID-19, no spectators are allowed at Blackthorn this weekend.

Residents seek guidance as they deal with raccoons

NILES — Masked bandits appear as the darkness falls over Niles. They find their way into porches and into dumpsters,... read more