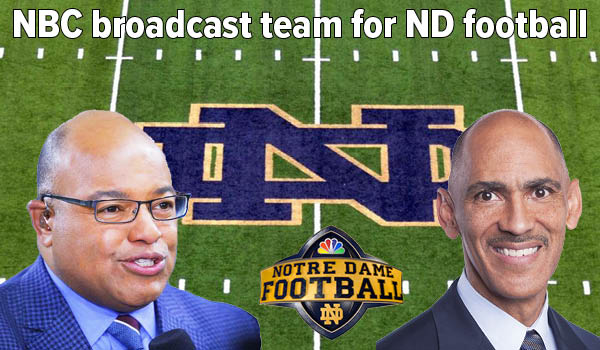 NOTRE DAME, Ind. — The University of Notre Dame and exclusive football broadcast partner NBC Sports have announced updated kickoff times and the broadcast crew for the 2020 campaign, which will mark the 30th season of the Notre Dame on NBC partnership.

The slate will feature a pair of primetime games at Notre Dame Stadium, and coverage will feature Mike Tirico (play-by-play) and Super Bowl-winning head coach and Pro Football Hall of Famer Tony Dungy.

Dungy will be paired with Tirico and Kathryn Tappen as lead analyst to call Fighting Irish games. The crew will be joined by new NBC Sports host and Notre Dame alum Jac Collinsworth, who will host NBC Sports’ pre-game, halftime and post-game coverage, and on select weeks, will be joined by Heisman Trophy winner Doug Flutie.

Five of Notre Dame’s six home games will be broadcast on NBC. The Notre Dame-South Florida game slated for Saturday, Sept. 19 is the exception, as it will be aired on the USA Network.

, a member of the NBC family of networks.