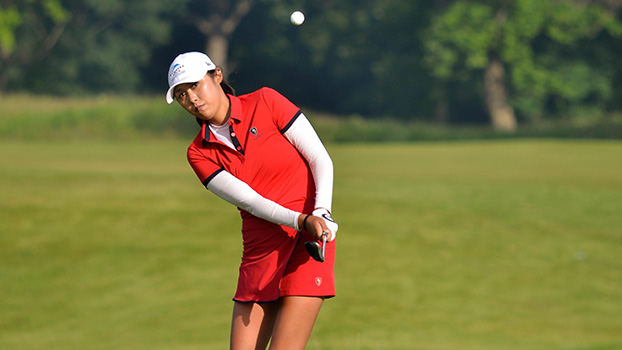 SOUTH BEND — The slogan for the Symetra Tour is “Road to the LPGA.” That road has been a long and winding one for the players this year due to a global pandemic.

Initially scheduled for June, the Four Winds Invitational will finally get started at Blackthorn Golf Club in South Bend on Friday morning. The tournament will wrap up Sunday afternoon with the champion walking away with $22,500 of the $150,000 purse.

“We are excited to host the Road to the LPGA for another year at Blackthorn Golf Club,” said Tim Firestone, the Owner and General Manager of Blackthorn Golf Club. “We know the players have been working hard in their extended offseason and we cannot wait to see what they have in store for the Four Winds Invitational. They are exceptional players and never fail to impress.”

A field of 132 golfers, including a pair of exemptions, will head to South Bend this week to compete in a 54-hole tournament. The field will be cut to the low 60 scores and ties after the first 36 holes.

A new champion will be crowned as last year’s winner, Perrine Delacour, of France, finished first in the Volvik Race for the Cup and earned a spot on the LPGA Tour. The Four Winds Invitational was Delacour’s first Symetra Tour victory. She went on to also win the Prasco Charity Championship.

Not only is the Four Winds Invitational one of the top stops on the Symetra Tour, it also is the second leg of the Potawatomi Cup Series. The Potawatomi Cup awards point to the players, who are chasing an additional $20,000 in bonus money, which will be awarded on Sunday after completing the final round.

The top five players in the cup standings will receive money, including $10,000 for the winner and $5,000 for the runner-up.

“We are excited to Four Winds Casinos for hosting us for the ninth year,” said Mike Nichols, the chief business officer of the Symetra Tour. “In addition to the outstanding hospitality from the staff and volunteers in South Bend, I am also anticipating the annual awarding of the Potowatomi Cup. In a year like this, this extra prize money is so important to our athletes, and we are grateful the Nottawaseppi Huron and Pokagon Bands of Potawatomi Indians for coming together to continue to provide this opportunity.”

Due to COVID-19 restrictions, there will be no spectators allowed at Blackthorn Golf Club during the tournament.

The first and second rounds, which will be played on Friday and Saturday, are scheduled to begin at 7:45 a.m. Sunday’s final round is set to begin at 9 a.m.

NOTRE DAME— With the 2020 season opener against Duke on Sept. 12 drawing near, the University of Notre Dame announced... read more