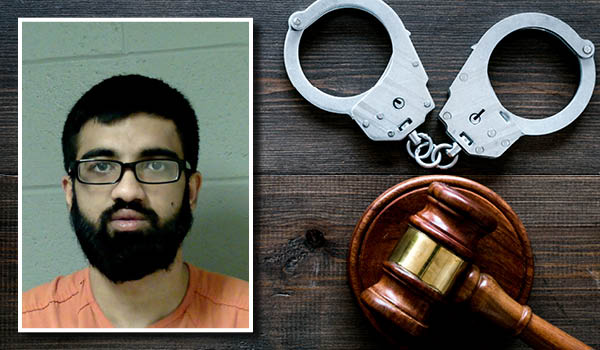 Arsalan Rehman, 24, of Mishawaka, pleaded guilty to delivery of marijuana and was sentenced to two years’ probation, credit for two days served and $2,478 in fines and costs. His license is suspended for six months and his firearm forfeited.

The incident occurred Feb. 1 in Ontwa Township when police stopped him for running a red light and found marijuana, a scale and a loaded gun in his car. Charges of drunk driving and carrying a concealed weapon were dismissed.

“The thing that struck me is that he is a relatively young man at age 24 and made a bad decision,” he said.

He told Rehman that his office could have easily pushed a felony firearm charge from the incident.

“You’re playing with fire,” he said. “I just encourage you to put this behind you.”

Defense attorney Albert Mais noted Rehman’s military record which includes tours of Afghanistan and the receipt of several medals and commendations. Rehman is currently a student at Indiana University in Bloomington and studying to be a social worker.

“He has been a good person his whole life and made a mistake that day,” he said. “A lot of young men came back from the service and made mistakes. I know he’s on the right track now. He’s going to school full time and on the dean’s list. He has a lot of positives going for him. He’s an intelligent young man, he won’t repeat this mistake in the future.”

“I hope you realize that drugs and a loaded gun are not going to help you in pursuing your career,” he said. “This is your first foray into the criminal system and I hope it’s your last. You have a good long life ahead of you. Your army background will help you, guns and drugs won’t.”

In another sentencing, a Marcellus woman was sentenced to jail and probation after causing over $50,000 worth of damage to a home she was renting last year.

She can serve the remainder of her jail time in the Twin County Probation Program. If she does not complete that program, her time there will not be counted as part of her jail term.

The incident occurred April 18, 2019, in Marcellus when she trashed the rental home and set a fire. A charge of malicious destruction of property over $20,000 was dismissed.

Defense attorney Jim Miller acknowledged that his client needs to make changes in her life.

“Twin County will allow her to get some structure to get away from drugs and people who drag her down,” he said.

Herman noted that she posted a picture of herself sticking up her middle finger in front of the fire and destruction on Facebook.

“You state you’re not a bad person and don’t believe you should be in jail but when you failed to cooperate and appear when you were released from jail, that’s sticking your middle finger up at the court,” he said.

Herman noted that the sentencing guidelines could have resulted in a prison sentence and any further convictions will continue to call for prison.

“You need to use your smarts to get your life back in order,” he said.

NILES — A Niles resident wanted to do something kind for those serving her and her community. Paxton Schaller, of... read more