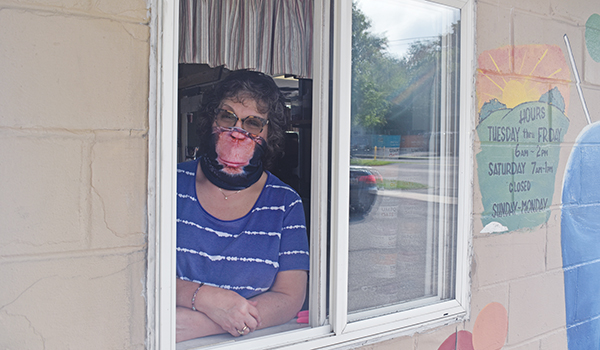 Paxton Schaller, of Niles, donated $1,000 as part of a viral video challenge. Joyce Bashara, the owner of Brew Ha Ha, was the recipient of a donation.

NILES — A Niles resident wanted to do something kind for those serving her and her community.

Paxton Schaller, of Niles, used her Facebook as a way to rally support and funds to give large tips to two servers. However, the tips were not the typical 20 percent amount.

She decided she would gift the tips raised from the 75 people who donated to two different people if she could. She posted on Aug. 24 her intentions to raise money to tip a server in Niles. Her original goal was to raise $500 in four days. She raised enough to give large tips to three servers in the area.

The tip challenge began at the beginning of 2020, with celebrities giving tips of $2,020. Others followed suit giving $20.20 tips on smaller bills. The challenge is currently on TikTok, as people gift large amounts of money to others they encounter in their everyday lives.

“I knew I wanted to do a restaurant that has loyal servers and work hard,” Schaller said. “I knew those ladies at Prime Table do so. I didn’t have a certain server in mind, just whoever’s table I got sat at.”

When the amount Schaller raised kept going up, she had to brainstorm another person to give the gift to.

“I kept thinking about where else I could go,” she said. “Then, out of nowhere, I was like Joyce from Brew Ha Ha. She is always so sweet. There have been times I forgot my wallet, and she would tell me not to worry about it.”

Joyce Bashara, owner of Brew Ha Ha, said the gift was not expected.

“I’m not a person for loss of words, but I was this morning,” she said. “That was just amazing.”

Bashara looks at her job as a calling.

“It’s a blessing. It’s not a job here, and Paxton just drove that home yet again,” she said. “Every day, we see someone do something for somebody here, and this just blew me away.”

In the Facebook video Schaller posted, as she gave the tip to Bashara through the drive-thru, Bashara becomes overwhelmed with emotion. She stops what she is doing as Schaller tells her what she is about to give her and who is it from Bashara is heard saying over and over “you’ve got to be kidding me.”

Schaller said, “this isn’t me, this is everybody on my Facebook.”
Bashara responded in the video, “but you started it.”

In the second video uploaded to Facebook, Schaller is seen paying her bill at Prime Table Restaurant. The server, who is unnamed in the video, is seen about to clear the table when Schaller said she had a question for her. She asked the server if she had heard of the tip challenge, and then she explained it to her. The server is seen smiling and excited at the news.

“People are going through such tough times themselves through all of this,” she said. “I bet some of the people who gave did not even know who I was or the people at Prime Table. They just did it because they are good hearted.”

Schaller said she filmed the tips so that everyone who gave to her Tip Challenge would know the money went to where they intended it to go. She did not want anyone to think she had scammed them.

After giving the first two tip challenge gifts, Schaller said she felt that she was going to have a great day.

“I feel so refreshed and peaceful right now,” she said. “I feel like every time I do something nice, and go out of my way, I get this sense of a deeper understanding for the world.”

NILES — Just around 5 p.m. Wednesday, dozens of classic cars in every color from powder blue and baby pink... read more