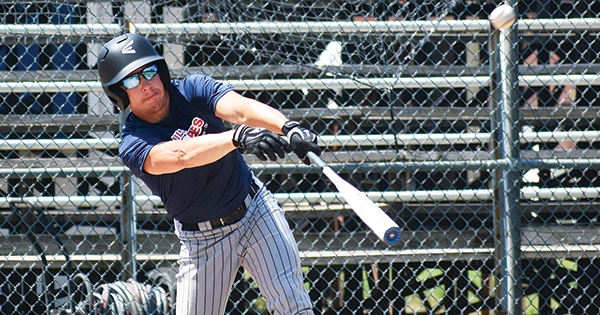 NILES — The Niles Knights rallied to defeat the South Bend Opossums 11-9 in the Thomas Stadium Adult Baseball League on Sunday.

The Knights scored four runs in the first inning to take a 4-1 lead only to have the Opossums tie the game at 8-8 with a four-run bottom half of the fourth. The Knights scored three times in the top of the fifth to earn the victory.

David Sokolowski went 3-for-4 to lead the Knights, who finished with eight hits. Kevin Gross Jr. added a pair of singles.

Kevin Bokowski picked up the victory with relief help from Derek Anglero.

T.J. Gray and Jarod Laymon both had two hits for the Opossums. Gray doubled, as did Zac Gray.

A 10-run first inning for the Diamond Jaxx made short work of the Michiana Steelheads.

The Jaxx pounded out 12 hits, including two each from Spencer McCool, Ryne Siebenmark, Devin Williams and Vince Rago. McCool had a double, while Williams tripled.

Gary Sherman tripled for the lone hit for the Steelheads. Kevin Ballge suffered the loss.

Los Elkhart Cubs scored two runs in the first, third and fourth innings to earn the victory on Sunday.

Luis Navarro tossed a three-hitter with four strikeouts and no walks for the Cubs.

Domi Perez drove in a pair of runs for the Cubs.

A pair of big innings gave the South Bend Expos the victory over the Michiana Mobb.

South Bend finished the game with 15 hits, including three each from John Miles and Joe Stuckenborg. Brandon Knapp and Montana Madison added two hits each. Tony Iorio and Struckenborg both doubled.

Shane Keultjes scattered six hits and struck out five to pick up the win.

Ellijah Williams took the loss for the Mob.

Keyontae Jordan and Alex Wickizer both doubled for the Mob.

The Pop Flies scored a pair of runs in the top of the sixth to pull out the win over the Great Lakes Grizzlies.

Andrew Brawley went 2-for-3 with a double and a home run for the Pop Flies. He also drove in four runs. Connor Brawley added a pair of hits.

Johnny Nate picked up the mound victory in relief. He struck out three and allowed one hit over three innings of work.

Matt Jewell suffered the loss in relief for the Grizzlies.

Doug Wall, Jewell and Michael Margol each had two hits for the Grizzlies.