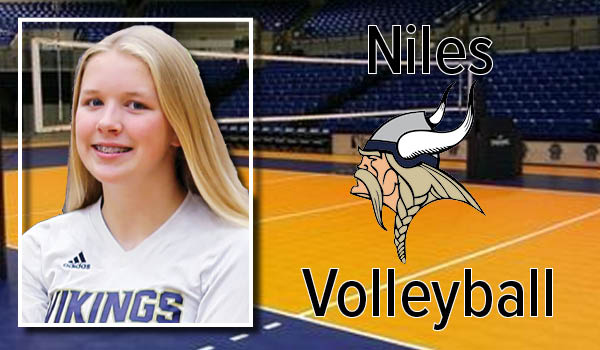 Niles gets off the sand and into the gym for opener

SOUTH BEND — The Niles volleyball team has spent the past two months practicing in the sand as the state of Michigan has not allowed high school gymnasiums to be reopened since schools were closed last March due to COVID-19.

The Vikings got their first taste of indoor action indoor as they traveled south of the border to take on South Bend St. Joseph in a non-conference match. The Indians defeated Niles in straight sets 25-17, 25-20 and 25-22.

“I am so proud of this team,” said Niles coach Jenny Nate. “They came right from the sand court into the gym tonight without even getting a single practice indoors, and although we had to constantly make adjustments to transition to our indoor game, the scores show the steady improvement we made throughout the match. They had great attitudes, energy, teamwork, and hustle. I am so happy that all three of our teams finally got the chance to get on a court and compete against another team. They have worked incredibly hard this summer conditioning in parking lots, playing in sand and rain, and keep showing up each and every day with positive attitudes and incredible work ethic.”

Nate cannot say enough about the effort her squad has put in over the summer despite all the restrictions that must be adhered to in order to even host a practice. Currently, the state of Michigan is only allowing two of its eight regions — Region 6 and Region 8 — to host volleyball competitions in gyms. The rest of the state is awaiting word from both the governor’s office and the Michigan High School Athletic Association about when it will be allowed to start indoor competition in the remaining six regions.

“We will continue to work hard one day at a time in the sand and will take what we learned tonight and will continue to improve as we prepare to hopefully get back in our gyms, train, and compete,” she said. “The future is bright, and the steady improvements we made in one match are just a glimpse of what these athletes are capable of as we continue to move forward. I love their heart, focus, determination, and resiliency, and I know they will be back on our sand court tomorrow ready to go hard, keep digging, and prepare for our next chance to compete.”

The Vikings now return to their holding pattern as they wait for the state to decide when, or if, there will be a volleyball season this fall. Niles is currently scheduled to return to the court on Sept. 9 when it hosts its first BCS Athletic Conference match against Berrien Springs.

The Niles JV volleyball team was defeated by host South Bend St. Joseph 2-0. The Indians defeated the Vikings 25-12 and 25-15.

“Given the circumstances and barriers we are currently facing, I was highly pleased as a coach with how they played tonight,” said Niles JV Coach Sammee Schaller. “This was our first time on a court in a very long time. Our practices have been outside playing beach volleyball. We needed tonight to not only get to play some volleyball, but to see where our weaknesses and strengths lay. After tonight’s game, we will go into practice tomorrow with adjustments in mind and parts of the game that we need to work on. SB Saint Joseph is a tough competitor, and we take the lost with dignity and a great learning and building opportunity.”