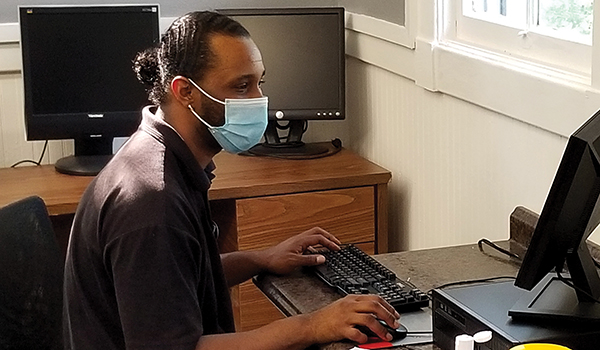 NILES — Volunteers were on hand and ready to help Thursday at the Ferry Street Resource Center. The center, 620 Ferry St., was on its second day of hosting its census event.

The event paired those who filled out their census form at the center with a free pizza to take with them as they left.

The event grew from a goal of having a greater percentage of the area’s homeless and precariously housed populations fill out their census forms before the deadline.

In lieu of the barbecue party center director Ric Pawloski had originally planned, due to COVID-19 social distancing mandates and precautions, he opted instead to give pizzas to participants who successfully filed their census forms.

Each pizza box included a gift card. Some had higher amounts than others.

The center had four computer stations ready for residents to fill out the census form to submit online. Volunteers were ready to assist with any questions about the process people coming to the center had.

Pawloski began the event with a goal of having 200 people submit their census forms. By around 2 p.m. Thursday, the center had already registered about 30 percent of that goal.

“We had a lot of people [Monday],” Pawloski said. “All we can do is be here and be ready.”

On Thursday afternoon, he was brainstorming places to put more fliers out to get residents of the city in areas that he knew needed to be counted.

The census is a taken every 10 years in the U.S. Each round of the census, census workers aim to get as many of the residents of the country counted. The counts then determine federal and state level funding, as well as government representation. This census round, the efforts by the U.S. Census Bureau were originally extended due to the COVID-19 pandemic to Oct. 31. Since, the deadline has been pushed back to Sept. 30 to complete all counting efforts, both field and self-reported.

“For us here [at the center], it’s important because we want to make sure the homeless are properly represented in this area so that when we look for funding to help people in our area, the funding matches the need,” Pawloski said. “That’s been our focus.”