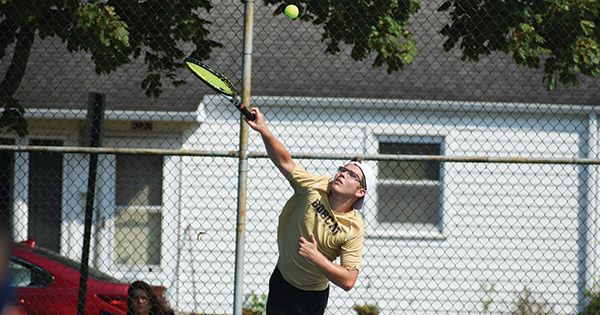 The quad was divided up into two sites to keep with the social distancing guidelines set by the Michigan High School Athletic Association and the state of Michigan.

“It was a good day all around,” said Brandywine coach David Sidenbender. “I think the guys are really improving and getting comfortable in their roles. It’s just great to get out and play, even in the extreme heat, almost 100-degree heat index. It was a good tourney to get some much-needed experience for us.”

In singles competition, Brandywine’s Jacob Fox and Corbin Gamble were champions at the No. 1 and No. 4 flights.

Tweedy and Prenkert are relatively new to tennis, but both have shown constant improvement in the early stages of the season, according to Sidenbender.

Buchanan had one champion as Colby Borgman was the winner at No. 3 singles. Rylen Baker was the runner-up at No. 2 singles for the Bucks.

Niles’ best finishes came at No. 2 doubles with Ty Elms and Justin Russo, while Rylan Custard and Ryker Daniel were third at No. 4 doubles.

NOVAK: Sports teams get to work while two await word

It was great to get back to work last week, nearly six months after sports were suspended by the Michigan... read more