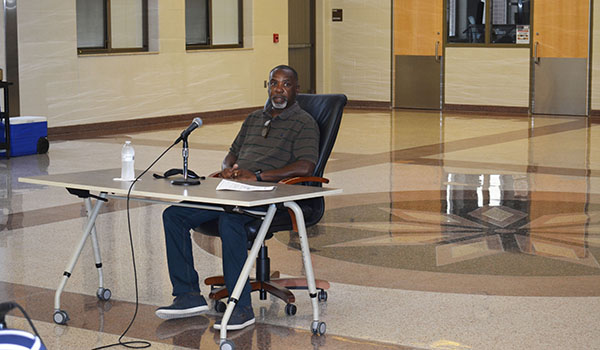 When the dust settled, Tracey Hatcher was left standing.

The school board unanimously voted for Hatcher to be appointed to the seat vacated by Phyllis Sarabyn, who resigned from her position as board trustee due to personal reasons.

“We had lots of great candidates,” said school board president Larry Schmidt. “I’ve been in this business for a long time, and I’ve honestly never seen as high quality of candidates that I saw today. It was absolutely amazing. All age groups, all backgrounds, you name it. They were there, and they did a good job of presenting themselves to the board, and I think the board made a wise choice. I look forward to working with Mr. Hatcher, and I think everything will be totally great.”

“I’m looking out for the welfare of other people besides just myself,” Hatcher said during his interview. “I don’t have a hidden agenda. I don’t have any kids in the district, but I love kids. I would really like to see this community grow as a whole.”

Due to the ongoing COVID-19 pandemic, the council hosted the interviews in the middle school cafeteria, while streaming them live on Youtube for the public to view.

The board will asked each member seven questions, with the majority of the interviews being 10 to 12 minutes in length. After the interviews were concluded, the board members chose the top five candidates moving on to the second round, and the top two moving onto the final round, before choosing the board member. The entire interview process lasted more than three hours.

Hatcher has been the pastor of Peace Temple Church of God in Christ, 102 Andrew St., Dowagiac, for the past four years. A longtime boys basketball and track and field coach for the district, Hatcher has been a fixture in the Dowagiac community for decades.

“His honesty stood out to me,” Schmidt said. “His knowledge of the community and his likability with kids, that’s what it’s all about. He’s not in it for any personal gain. He’s in it because he loves kids.”

Communication and the ability to listen to the needs of students are skills Hatcher will bring to the board, he said.

“Being able to communicate is important,” Hatcher said during his interview. “I think we could work better knowing that because sometimes we see kids, and we think all kids are the same. It’s not ‘one size fits all’, and if you understand that, you can deal with young people better that way. I think we should be more open to hearing what they’re saying because if we listen to what they’re saying, they’ll really tell us what’s going on with them. Sometimes we don’t want to listen. That doesn’t mean we’re going to do everything they say, but it’s good to be open to hearing what they have to say when it comes to dealing with things in the school.”

Hatcher’s rapport with the community is something that Schmidt believes will pay dividends for the district going forward.

“I think the biggest thing he’ll bring to the board, especially early on, is that he has a foothold in his community with our student population,” Schmidt said. “That’s what we need to invest in, and that’s what we just got, for sure.”

DOWAGIAC — The Young Professionals of Greater Dowagiac is gearing up to host its second annual Paddling Poker Run. The... read more