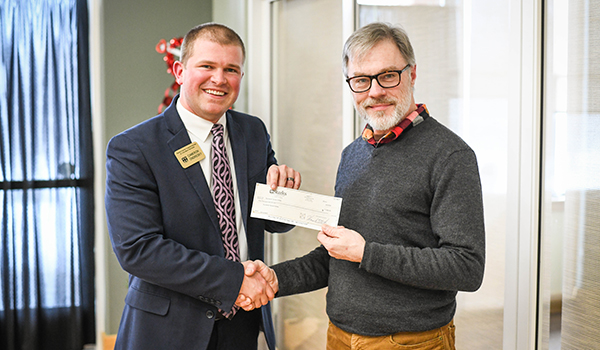 The Michigan SAC is a 40-member advisory board that works with the Michigan Commission on Services to the Aging.

“The State Advisory Committee to the Commission on Services to the Aging is a diverse group of individuals working together to improve the lives of older Michiganders,” said Commissioner Kristie Zamora. “Each year, SAC members research a topic based on an issue pertinent to older adults. Work groups are formed, and each SAC member contributes to the researching, interviewing and writing to create a final report and propose recommendation actions for the Michigan Department of Health and Human Services and the legislature.”

Burck said his appointment to the SAC on Aging will enhance his current work with the Buchanan Area Senior Center.

“This fits with my background and my interests,” Burck said. “I’ve done community development work since 1989.”

His community development work goes back to when he lived in Chicago, before moving to Buchanan to care for his mother. While he was caring for her, he took on contract work, but found the position as executive director of the senior center fit his previous experience.

Burck’s work with the senior community has shifted through the challenges the pandemic has presented. The Buchanan Area Senior Center had to stop or limit its regular programming.

“All of our most popular programs, we had to stop,” Burck said. “We are doing exercise programs outside, so people can take their masks off. That’s going to work for a while, but once we get into the next two or three months, it won’t be possible anymore.”

He is already anticipating the challenges the colder weather will bring.

“One of our biggest concerns that we have is the isolation and depression, and the impact emotionally this has in peoples’ lives,” Burck said. “For a lot of people, [the senior center] is their main social network. When you can’t come here anymore, and you’ve survived your partner and you’re living alone, that is very isolating.”

He said another program the center has increased staffing to is its Compassionate Caller program.

“We have twice as many people now as compassionate callers,” he said.

The center is also utilizing its patio to do socially distanced luncheons three times a week for seniors to get out of the house and interact.

As he adds the new role with the Michigan SAC on Aging to his resume, he will bring the experiences and research of what he sees in his work in the Buchanan community to the state level.

“That is part of what they want from your participation,” Burck said. “To understand the situation in your area. Each person brings that from their area of the state.”

EDWARDSBURG — Edwardsburg resident Debra Inglefield, 61, did not choose Mippy, her large, long-haired black cat. He chose her. On... read more