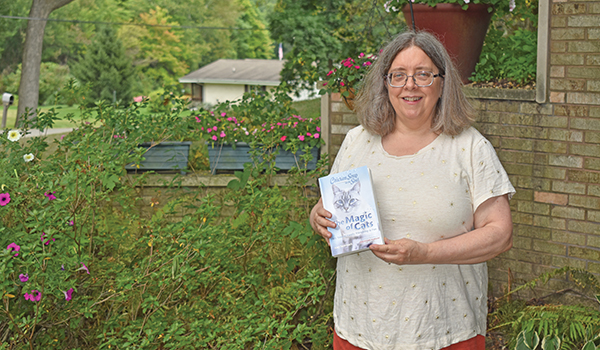 On an April afternoon in 2012, Mippy, who had just been chased out of Northside Middle School in Elkhart, hopped in Inglefield’s Mercury Milan engine compartment. Unaware, Inglefield hopped in the driver’s seat, turned on the engine and drove away, attending several appointments throughout the day. About 12 hours and 70 miles later, Inglefield was back at her home on Christiana Lake before she heard a soft mewing from underneath her hood.

Startled to find an unscathed cat inside her car, Inglefield took Mippy inside, where he has remained for the last eight years.

“He’s always wanted to be a part of the action,” Inglefield said with a laugh. “Ever since that first day.”

Inglefield has always thought Mippy’s story was unique. Now, his story is available to readers across the country.

A short story written by Inglefield has been featured inside a recent addition of “Chicken Soup for the Soul.” The edition, “The Magic of Cats: 101 Tales of Family, Friendship and Fun,” features a number of short stories and essays about the authors’ feline friends. Royalties from book sales will support the American Humane Society.

“How to Acquire a Cat Without Really Trying” is Inglefield’s entry to the collection. It tells the story of how Mippy came to choose her and her husband as his new family.

An area music teacher and adjunct professor at the University of Notre Dame, Indiana University South Bend and Andrews University, Inglefield does not consider herself a writer. However, when she said an ad on Facebook from “Chicken Soup for the Soul” seeking stories about pets for its next edition, she decided to type up her experience with Mippy. She did not expect her submission to make it far in the process, but knew the book’s proceeds went to a good cause and thought, “why not?”

When Inglefield got word that her story had made the final cut to be included in “The Magic of Cats,” she was surprised but excited.

“I had done writing in school and a little bit of fiction here and there, but I had never published. I sat down and wrote it in about 15 minutes,” Inglefield said. “It was a big surprise that they took it. I think it’s really cool. I think it’s neat to have his crazy story out there for people to read.”

On her basement sofa, Inglefield has a box filled with copies of the “Magic of Cats” set to her by the publisher. As she holds a copy with a smile, she said she hopes to sell her copies to raise money for an area animal charity. She said she wants to help other cats find their forever homes.

“Mippy adopted himself, but there are so many other animals that our local shelters can help,” she said.

Until she can make that happen, Inglefield said she is just happy to have Mippy hang out in her music studio, greet her students and be the king of her household.

“He adds a lot to our lives,” Inglefield said. “There’s a sort of a sense of wonder when you watch the process of a pet coming to trust you. Now, he stays with us as much as he can, likes to be fed his wet food with a spoon, jumps up on the counter, so I’ll turn on the faucet for a drink. He communicates clearly to tell me what he wants. He’s become a real family member.”

EDWARDSBURG — An Edwardsburg gym has reopened its doors despite state orders mandating that gyms remain closed during the COVID-19... read more