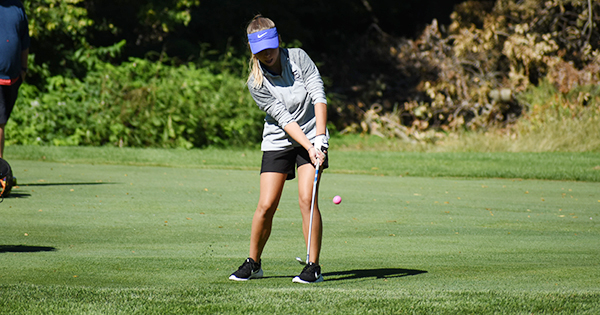 Eddies knock off Vikings once again

EDWARDSBURG — For the second time in just over a week, the Edwardsburg girls golf team defeated Niles in a non-conference girls golf match.

The Eddies’ Chloe Baker shot 50 to earn medalist honors on Thursday. She shot 58 in the first meeting between the two teams.

“Girls continue to improve,” said Edwardsburg Coach Stephen Wright. “We are very young as a team, so I believe our best is yet to come.”

The Eddies also got a 52 from Channing Green, who shot 53 at Orchard Hills, and a pair of 56s — one from Autumn Sawyer and the other from Chelsea Zeismer. Zeismer improved her score by a stroke from the first meeting. Sawyer tied for medalist honors at Orchard Hills after shooting 51.

Niles was led by Maddie Fuller, who shot a 56. She did not figure into the scoring in the first meeting between the two schools. Alexis Rauch shot a 57 on Thursday, which was 21 strokes better than her score from Orchard Hills.

The Eddies return to action Sept. 10 when they travel to Three Rivers to face the Wildcats and Otsego at Sauganash Country Club for their Wolverine Conference opener. Play is scheduled to begin at 4:30 p.m.

Wright is looking forward to the start of conference play.

“I think Plainwell will be the team to beat,” he said. “We are not at their level yet, but I believe our team will continue to improve every match, and I look forward to watching our progress.”

MHSAA director says the state is waiting on governor