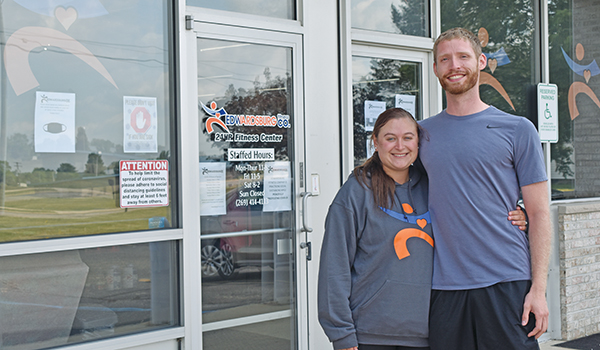 EDWARDSBURG — An Edwardsburg gym has reopened its doors despite state orders mandating that gyms remain closed during the COVID-19 pandemic.

Monday, Edwardsburg Fitness Co. reopened its indoor facilities. The action goes against the region’s current COVID-19 mandates put in place by the state government. Though gyms and fitness have been allowed to reopen in areas of the state that have entered Phase 5 of Gov. Gretchen Whitmer’s MI Safe Start reopening plan, lower Michigan remains in Phase 4, which mandates indoor fitness facilities stay closed.

Despite mandates to stay closed, Edwardsburg Fitness Co.’s owners, Kyle Dale and Justine Ely, both of Edwardsburg, said they felt reopening was the right thing to do both for their business and for the health of the community.

“For us, reopening was more about how we want to take care of the community,” Dale said. “We are navigating this to make sure that everyone feels safe.”

The engaged couple took over ownership of the gym a month ago from a family friend. Though they said there were challenges to becoming new business owners during a pandemic, they knew the time was right to take the opportunity. A month later, they said they knew it was the right time to reopen their doors, as studies have shown that preexisting conditions that can be managed with exercise, such as obesity and heart disease, are contributing factors to COVID-19’s severity.

“I think we can be on the front of that and be more offensive with preventive care and keeping people active because of COVID,” Dale said. “I just think people need the opportunity to take care of themselves.”

Earlier this year, a team of public health experts ranked gyms as a having a relatively high COVID-19 risk level — an eight out of 10. This gives gyms the same level of danger associated with sporting stadiums, amusement parks and churches.

Dale and Ely said they are following all the guidelines mandated for gyms in regions where they could reopen, including northern Michigan and Indiana, to lower the risk of COVID-19 exposure in their gym. The couple is enforcing masks in all its common areas, limiting guests, enforcing social distancing and frequently sanitizing surfaces and equipment. They are also tracking when gym-goers come and go from the facility to alert all clients should someone contract the virus.

“We are following all the standards [the state] has set, plus a little bit extra,” Ely said.

Edwardsburg Fitness Co. is not the only area gym to reopen despite state orders. In June, Dowagiac resident Gary Marshall reopened his Dowagiac and Niles FitStop 24 locations. For each day he is open, he receives a citation of $500. As of Friday, he reported his fines sat at more than $18,000.

Though Ely and Dale acknowledged they could potentially face hefty fines for opening, they said it was a risk they were willing to take.

“We are concerned, certainly,” Dale said. “But what is the health of the community worth at a time like this?”

“We can’t put a price tag on the health of the community,” Ely added. “That’s why we decided to take the plunge.”

Currently, the couple has no idea when lower Michigan gyms might be allowed to reopen legally under the MI Safe Start Plan. The couple said they reached out to the governor’s office dozens of times in the weeks before they reopened their doors, but received little to no guidance.

So far, gym owners across the state have received no timeline for when they might be able to reopen, though some have been looking at activity in courts as a road map.

On June 25, a federal judge struck down portions of Gov. Whitmer’s executive orders, including a blanket ban on the reopening of gyms and workout facilities statewide. However, a U.S. Court of Appeals decision blocked the reopening due to the potential risk of spreading COVID-19.

Also, in May, a group of independently-owned gyms sued Whitmer at the Michigan Department of Health and Human Services for violations of constitutional rights. Though there has yet to be movement on the case, a lawyer involved, Scott Erskine, plans to file a new summary judgment motion this week.

Until gyms and fitness centers are allowed to reopen either through legal action or by lower Michigan moving into Phase 5 of the MI Safe Start plan, Ely and Dale said they hope to grow and operate their business while giving back to the health of the community.

“We want to give this community everything we think it needs and deserves,” Dale said. “I think the ability to engrain health and fitness into a small, especially like this, just can pay dividends so quickly. I really believe that.”