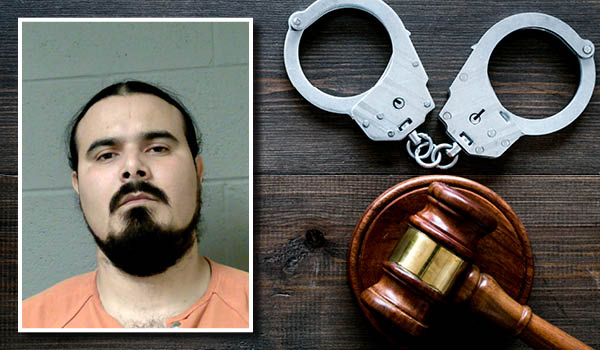 CASSOPOLIS – A Niles man is going to prison after being convicted of sexually molesting a young girl over a three-year period.

Eray Alfonso Diaz, 35, of Niles, pleaded no contest to two counts of first-degree criminal sexual conduct and was sentenced to concurrent terms of 10 to 40 years in prison. He has credit for 203 days already served.

Diaz must pay $1,176 in fines and costs as well as for the young victim’s future counseling costs. He was ordered to register as a sex offender and must be on lifetime GPS monitoring. He can have no contact with the victim or any of the victim’s family members while they are under age 18.

The incident occurred over a three-year period from 2017 to early 2020 at a location in Howard Township. The victim is now 15. One other count of first-degree criminal sexual conduct was dismissed as part of his plea.

Cass County Prosecutor Victor Fitz called Diaz a “man who has given himself up to his reprobate mind.”

“He has placed a great evil on [the victim],” Fitz said. “What he did will never be erased from her memory for the rest of her life to the day she dies.”

“He is a sick man,” he added. “You are a sick man when you say you fell in love with [the victim], and God put her there just for you. You did a great, great evil to her. She is a child and greatly injured both physically and emotionally.”

Fitz also noted that Diaz is in the U.S. illegally, which is a burden on the system but emphasized that the focus should be on the “great evil” placed on the victim.

Defense attorney Greg Feldman called what his client did “an awful crime.”

“No words can be said; it’s an awful crime,” he said. “But it’s a knee jerk reaction to say he should be sentenced at the top of the guidelines. He has no prior record and is a hard-working person even though he is here illegally.”

He said Diaz has been honest with authorities and has expressed sorrow over what happened.

“I in no way condone this, but from I’ve seen it could be a cultural issue, a Latin issue but that doesn’t make it right,” he said.

Diaz apologized for his actions.

“I am sorry for what happened, I’m sorry,” he said.

Cass County Circuit Judge Mark Herman said the victim will suffer the consequences of Diaz’s actions as she grows into adulthood and for the rest of her life.

“I can’t imagine a more terrible breach of trust,” he said. “You ruined her life and ruined your life as well.”

Another case was adjourned for up to a month in order to get more information about cases a defendant has pending in Colorado.

Joshua Marcellus Orawiec is facing sentencing in two cases in Cass County. He has pleaded guilty to resisting and obstructing police and domestic violence in one case and second-degree retail fraud in the other.