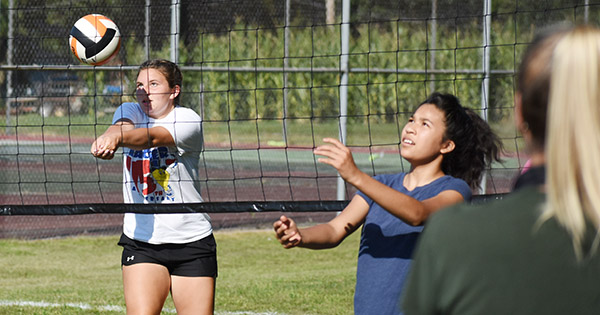 The MHSAA Thursday announced that competition for volleyball, boys soccer, swimming and diving may not yet begin. Teams will still be allowed to practice outdoors. (Leader photo/SCOTT NOVAK)

No volleyball, soccer and swimming for area teams

DOWAGIAC — The Michigan High School Athletic Association announced that its representative council has voted to allow the start of competition in volleyball, boys soccer, swimming and diving for two regions in northern Michigan and the upper peninsula Thursday afternoon.

The rest of the state, including southwest Michigan, can continue practicing outdoors until the governor’s office opens up the remaining six regions to use indoor facilities and changes physical distancing requirements.

“Our council has made clear it is ready to offer students these opportunities, pending approval from Gov. [Gretchen] Whitmer that we may do so,” said MHSAA Executive Director Mark Uyl. “We have been told that within a week, future guidance will address athletic issues that exist in current executive orders. We are awaiting that guidance. The MHSAA and representative council are committed to following all current and future executive orders and safety precautions. However, we need more answers before we can give all of our member schools the go-ahead to play each other again, and the majority of our schools are in regions that are not yet allowed to take part in volleyball, soccer and swim.”

Edwardsburg Athletic Director Kevin Dean is looking at the bright side of Thursday’s announcement.

“While it is disappointing that we didn’t get clearance to start soccer games and start using gym for volleyball, the fact that the season wasn’t totally canceled is a positive,” he said. “Hopefully, the governor will give us the OK for these competitions soon so that we can still play a majority of the schedule as it is. Our teams will continue to take all the necessary precautions as they practice so that we are ready to go when we get approval.”

Niles volleyball coach Jenny Nate and soccer coach Abel Fonseca also took the high road and are glad that the entire season was not moved to the spring.

The Viking volleyball team has been approved by the MHSAA to play a match at South Bend St. Joseph on Thursday.

For Fonseca, the news comes just two days before his season-opening VanDenBerg Invitational. He, like Nate, wants to focus on the positive.

“It is what it is, and we will go with it,” he said. “It is better than having it moved to a spring season. It is better than being two days away from starting our season and then having the whole season canceled. So, we are still alive. We still have tons of games to play this season, so we are going to take it day by day.”

Fonseca had already started thinking about the challenges of having both boys and girls soccer in the spring since he coaches both teams. He was looking for Niles Athletic Director Jeff Upton to schedule what amounts to doubleheaders, similar to how boys and girls basketball teams play games in the winter.

“I do not know if it would work, or even if the MHSAA would want it,” Upton said.

Upton felt like soccer would get the “green light” today, but volleyball was going to be difficult to get started since gyms are still closed under state guidelines.

Of even more concern was talk that started circulating Thursday morning.

“The rumor this morning out there was they were all getting shut down,” he said. “It is good news, but soccer being an outdoor sport, really thought it was going to be playing.”

The MHSAA also announced that football teams and spring sports teams would be allowed up to 16 contact days to be used for voluntary practices among students from the same school only.

Coaches may also work with unlimited numbers of players for general conditioning during that time, according to the MHSAA.

More information will be forthcoming from the MHSAA on spring football.