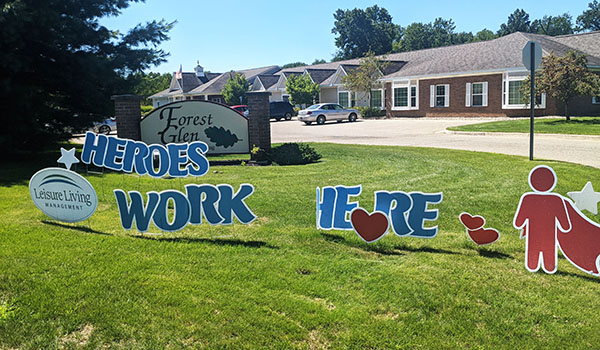 DOWAGIAC — A Dowagiac nursing home is giving back to first responders.

Local police, firefighters, EMTs, doctors, nurses and more are encouraged to attend. The luncheon will be the third that the center has hosted this year, and will be organized as a curbside/drive-through event to comply with social distancing guidelines.

“It was just something that we wanted to do for the community,” said Forest Glen life enrichment director Kayla Lyons. “At that time, we had had a few of our residents go to the hospital, and we have some residents sometimes that like to go for a walk on their own, so there have been times where the police have to help us get them back. They’re really involved with the residents, so we’re like ‘yeah, we should really do something nice for them.’ With all of the crazy stuff going on now with the police and all the stuff that they’re having to deal with on a daily basis, we want to show appreciation for them for everything they’re doing for the community.”

The meals will include barbeque ribs, potato salad, macaroni and cheese, fresh bread and brownies, all prepared by the nursing home’s gourmet chef.

“We’re pretty lucky to have one,” Lyons said. “We’re going with more of a summer thing this time and throwing some food on the grill.”

According to Lyons, the nursing home has another reason to host the luncheon.

“We have been COVID-19 free,” Lyons said. “So we’ve been wanting to do something because we’re excited about that. We wanted to do a celebration and decided to do a little function for the police and the first responders.”

Due to the ongoing pandemic, the nursing home has not allowed many visitors. According to Lyons, hosting luncheons is something residents look forward to.

DUS to hold public interviews for vacant board seat

DOWAGIAC — The Dowagiac Union Schools Board of Education will soon add a new member to its ranks. The board... read more