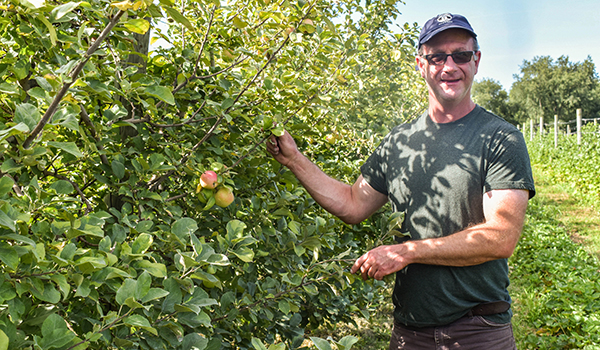 NILES — With a rocky start to the growing season with a frost in May, Berrien County fruit growers were concerned early in the season. Now, Lehman’s Orchard, 2280 Portage Road, is looking forward to visitors enjoying the fruits of the farm’s labor.

“I think [customers] can expect a stronger second half of the season as far as the crops,” said Steve Lecklider, who owns and operates Lehman’s Orchard and Lehman’s Farmhouse in downtown Buchanan, 204 N. Redbud Road.

“In the case of a late freeze, it doesn’t take everything, but it’s very selective on where the bloom was at the time,” Lecklider said of the frost.

In the case of the apples the orchard is known for, the king bloom on the apple trees was affected.

The orchard has been busy with its U-pick customers through the summer, as the crops that made it through the frost have ripened and flourished.

“Probably more this year than ever, because it’s a safe thing to do outside. It’s a group thing to do. It’s a healthy thing to do,” Lecklider said.

Sara Jane Lecklider, Steve’s mother and second-generation owner and operator of Lehman’s Orchard, said she has seen more unique customers this season than tin the past.

“One guy told me this is the only place they come,” she said. “They don’t even go to the grocery store.”

Steve believes that many see coming directly to the orchard as a safe way to get out of the house and engage in their local environment.

“I think safety and maybe having more downtime,” he said of why more people have visited the orchard this year. “It’s a different mindset. They’re staying local.”

Lecklider said he had sold more mature fruit trees and plants at the beginning of the season than usual. He believed it was so people could enjoy the plants and their fruits sooner, and from home, in case going out continued to not be an option under COVID-19 mandates and precautions.

On the orchard’s 55-acres of land willed with rows of trees, bushes and vines bearing fruit, he said the open air makes it more attractive to visitors.

Lecklider is knowledgeable about every offering from the orchard and at the restaurant, and is ready to offer that knowledge to those who arrive armed with questions.

“All of the raspberries are looking great. We’ll have a nice finish to the blueberry season and a nice finish with blackberries,” Lecklider said. “We’ll have a medium crop of the apples. Almost all of the varieties made it through the frost.”

Of the 11 fruits grown in the orchard, five of the crops were severely damaged by the frost. For 2020, there will be no sweet cherries, nectarines or pears. Some tart cherries and peaches made it and are available to buy from the Lehman’s Orchard shop.

“The frost took some of the early stone fruit and some of the mid-season raspberries and blueberries,” Lecklider said.

He was pleasantly surprised how well the orchard’s strawberry crop yielded.

“They did really well,” he said. “I guess you never know.”

Niles woman killed in US-12 crash

MILTON TOWNSHIP — A Niles woman was killed in a crash on US-12 just outside of Niles Wednesday morning, according... read more