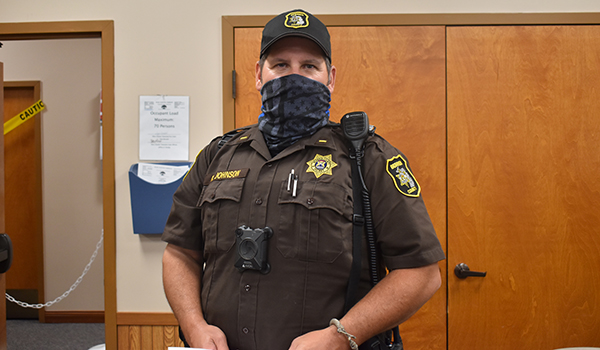 NILES CHARTER TOWNSHIP — The Niles Township Board of Trustees met on Monday evening for their regular meeting. During the meeting, the Berrien County Sheriff’s Department had two officers in attendance for its June 2020 police report, including Sheriff Paul Bailey and a new Niles Township Lieutenant Richard Johnson.

The two officers discussed the calls for service, types of crime officers have been encountering and how arrest procedures have changed due to COVID-19 precautions.

Herschel Hoese, board trustee, asked Johnson if car break-ins had slowed. He had heard about multiple earlier in the summer.

“We are still having car break-ins,” Johnson said. “I don’t know if May or June was our bad month, but we had a bunch them.”

Johnson spoke about a couple of recent arrests as of last Friday where a couple had been arrested and were connected to the crimes.

“Hopefully that deters some of it that we had going,” Johnson said.

A later question was posed to the lieutenant by Daniel Pulaski, Jr., board trustee, about any connection between the recently opened marijuana dispensaries in Niles and potential crime increase.

“Not that I have noticed,” Johnson said. “I know there is a lot of traffic when I go out there [Terminal Road area]. The parking lot [of The Releaf Center] is full. Here in the city, at Green Stem, that parking lot is full. That’s about all I can say.”

Sheriff Paul Bailey interjected that he believed the arrests he had been involved with had more to do with other drug use. He said many times when deputies arrest someone for breaking and entering, they often have used heroin or crack/cocaine.

“Most of the time it’s not marijuana. It’s the other stuff that is causing major problems in St. Joseph County, Indiana, and up here,” Bailey said. “We’ll continue to monitor it. Marijuana is legal now, so be responsible. Don’t drive under the influence, because you can get arrested just like you can for drinking too much beer, whiskey or whatever.”

Bailey also revealed the officers are not doing breathalyzer tests when they pull someone over for driving under the influence. Instead, they are doing a field sobriety test, and issuing a search warrant for a blood test if officers find reason.

“We are not doing any tests with our instrument right now because of COVID-19,” Bailey said. “We don’t want any of our officers have someone blow something right in their face, so we aren’t using those.”

The sheriff later gave an update on how the county jail is functioning under the COVID-19 precautions. Visitors, and even arresting officers, are not allowed inside the jail at this time.

“You aren’t allowed into the jail unless you work there as a deputy or you come in there because you did something wrong,” he said.

Bailey detailed that intake is done in the drive-up port. The inmate is screened for symptoms and has their temperatures taken. If they have had any contact with someone with COVID-19, or show symptoms, they are isolated in medical until they are cleared with two negative COVID-19 tests. Only after two negative tests are they released into the jail’s general population.

He said the UV machine, similar to ones used in hospital surgical areas, was half paid for by a grant through the department’s insurance carrier.

Later in the board’s regular meeting, members voted to appoint Brittany Floor to the Park Board.