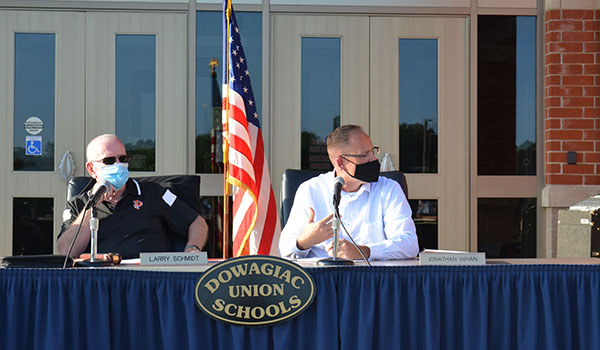 DUS to hold public interviews for vacant board seat

DOWAGIAC — The Dowagiac Union Schools Board of Education will soon add a new member to its ranks.

The board will host a special meeting to interview possible candidates for a vacant board seat at 5:30 p.m. Wednesday, Aug. 26 at Dowagiac Middle School.

The seat formerly belonged to Phyllis Sarabyn, who resigned from her position as board trustee due to personal reasons. Superintendent Jonathan Whan announced that 12 candidates have applied for the open seat during Monday’s meeting at Dowagiac Middle School.

“Looking over the candidates, I think it’s very impressive,” Whan said. “It’s a great representation of our community.”

Due to the ongoing COVID-19 pandemic, the council has decided to hold the interviews in public on the lawn of the middle school, weather permitting. The board agreed to host the interviews on Zoom if inclement weather arises.

“It will be set up like a typical board meeting, except there will be a table in front of the board, similar to the superintendent interviews,” Whan said. “Right now, we’re planning on it being outside. The forecast says it’s supposed to be nice next week. The meeting announcement has to be 18 hours before the meeting, so next Tuesday we can look at the forecast and decide whether or not we’ll be using Zoom.”

The board will ask each member seven to ten questions. Considering the number of candidates and the time it would take to conduct a thorough interview for each, Whan told both the board and those in attendance to expect the interview meeting to take three hours or more to complete. Whan will be the timekeeper for the interviews.

The deliberations will consist of three rounds, with the top six candidates moving on to the second round and the top two moving onto the final round.

The new board member would be appointed that night, after deliberations are over.

“Spoiler alert,” Whan said. “Anybody who comes to the interviews, you can’t tell anybody until the board president makes the phone call after the meeting. Those present will technically know the name of the new board member before that member is appointed.”

Underwood Shoes to close after 70 years in Dowagiac

DOWAGIAC — A longtime Dowagiac business is having a store-closing celebration because its owner is retiring. Underwood Shoes, which has... read more