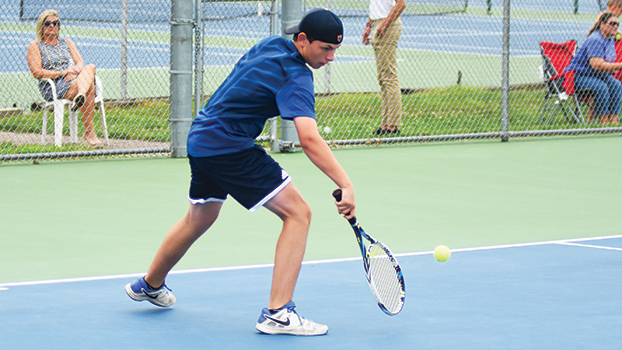 Niles preparing for the opening week of fall sports

NILES — Athletic Director Jeff Upton is getting set to host four events to kick off the 2020 fall sports season.

Of course, that is if the Michigan High School Athletic Association does not step in and stop them first.

Under the MHSAA guidelines, the Vikings can host their golf season opener against Edwardsburg at Orchard Hills on Wednesday as long as they stay under the state’s current 100 people. At the same time, the annual Niles Invitational will be hosted for boys tennis.

Niles will also host its annual Viking Stampede and the VanDenBerg Invitational soccer tournament. The stampede has been moved to the Dowagiac Middle School because the Niles course at Madeline Bertrand Park is too narrow.

The VanDenBerg Invitational will be split between Brandywine and Niles high schools as usual.

“The MHSAA has all games of soccer and volleyball on hold until their announcement on/before Aug 19,” Upton said. “If in that release they allow soccer to have games, our VanDenBerg Tournament will happen on Saturday. We have officials contracted. The fields and teams will be ready. Should the MHSAA delay games in that announcement, it would be almost impossible to reschedule the VanDenBerg. Soccer teams are limited to games per week and most teams have the schedule ‘maxed out.’”

The Eddies and Vikings, who will be members of the Wolverine Conference in 2021, will kick off the season at 9 a.m.

Back at Niles High School, the Vikings will host their annual tennis tournament. The tournament has been trimmed down to four teams — Edwardsburg, Berrien Springs, Bridgman and Niles — to meet the state mandate of 100 people or less at outdoor gatherings.

Play is expected to begin at 9 a.m.

In sticking with the state and MHSAA guidelines, there will be no spectators allowed at either Orchard Hills or Niles High School. There will also be no trophies or medals handed out at an awards ceremony.

Teams will not be allowed to set up tents, but may bring chairs to sit in that must be at least 6 feet apart.

“We host a tennis tourney on Wednesday and we had to ask teams not to attend as the site is limited to four teams,” Upton said. “So, three teams that normally would attend our tennis, won’t be able to attend this week. We are hoping to have those three back for another quad later in the season. There will also be no spectators allowed for the tennis tourney.”

Each race is limited to 70 runners per MHSAA guidelines. Each team will be allowed a maximum of 14 runners.

“Unless the governor changes the outdoor limits on the number of people allowed, there will be no spectators allowed at Niles events, Upton said. “For instance, at the Viking Stampede cross country meet, no spectators will be allowed. The boys run first, and there is now a maximum of 70 runners per race. When you add in the officials, timing service, race management teams and bus drivers, there can be no fans allowed. Then after the boys run, the girls run, and the boys need to leave the area before the girls race begins.”

The first race is scheduled to begin at 5 p.m. It is unknown if spectators will be allowed. That decision will come from both the state of Michigan and the MHSAA.

There will be no awards ceremony, no trophies handed out as there would normally be following the races.

Athletic Director Jeff Upton is getting set to host four events to kick off the 2020 fall sports season.

The first-round matches are slated for 10 a.m.

Cassopolis will take on host Niles, while Buchanan will play at Brandywine against the Bobcats.

The championship and consolation matches will both start at approximately 12 p.m. The finals will be held at Niles.

Currently, the MHSAA has not said if and when soccer can begin competition. The state is currently letting players practice in preparation for a season. The MHSAA’s decision is set to be announced no later than Aug. 20.

It is also unknown if spectators will be allowed. That decision will come from both the state of Michigan and the MHSAA.

If fans are allowed, admission will be $5 per person. Tickets are good for both venues.