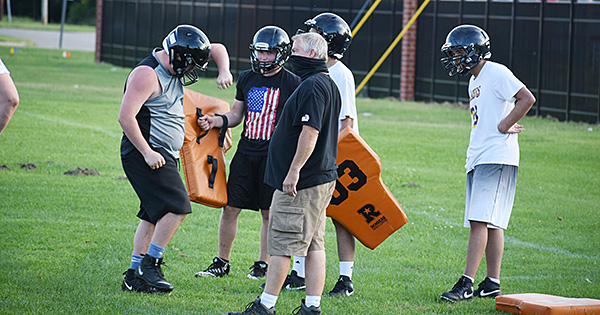 DOWAGIAC — The disappointment could be heard in both athletic directors and football coaches’ voices on Friday afternoon as the Michigan High School Athletic Association announced it was moving the sport to the spring due to the COVID-19 pandemic.

The athletic directors informed their coaching staffs, who, in turn, had to notify the decision to the players, who were wrapping up their first week of preseason practice.

Michigan was scheduled to put the pads on and begin full-contact drills starting Monday. Schools will be allowed to continue those drills through Wednesday, when the MHSAA is set to announce what football programs may do between now and the start of the spring season in March.

The MHSAA will also announce its decision on whether or not volleyball and boys soccer can begin competition. That announcement is supposed to come no later than Wednesday.

In a statement about the move, MHSAA Executive Director Mark Uyl, who has a son who plays football, said the representative council met Friday and made its final decision to move the sport to the spring.

“At the end of the day, we did everything we could to find a path forward for football this fall,” Uyl said. “But while continuing to connect with the governor’s office, state health department officials, our member schools’ personnel and the council, there is just too much uncertainty and too many unknowns to play football this fall. No one is willing to take the risk of COVID being passed on because of a high-risk sport. Decisions have to be made on our other sports as well, but none of those carry the same close, consistent and face-to-face contact as football.”

“Everyone in our program is heartbroken,” said Dowagiac coach Randy Brooks. “We started working on this season in early December. Our coaches, and players as well, have put in countless hours to prepare for this season. We just wanted to compete. I’m not sure what changed this last week to all of a sudden shut us down. I can tell you we have taken every precaution possible, and as far as I know, nobody on our team has the virus. We expect to hear more guidelines this next week.”

Brooks’ comments echoed those of coaches and athletic directors. Most wondered why this decision could not have been made prior to Aug. 10 when football was allowed to begin conditioning drills.

Edwardsburg coach Kevin Bartz, whose teams have played in two of the past three state championship games, was confused by the decision.

“I guess I do not see how anything has changed or gotten worse a week ago or two weeks ago,” he said. “Other than the kids are pretty excited to get going and doing things again.”

Edwardsburg had practice in the morning, so Bartz did not have any plans to bring them back Friday afternoon to break the bad news.

“We will wait until Monday morning when we planned to get together again,” he said. “Most of these kids already had plans for the weekend. We will get back together Monday and talk about where we go from here, and how we start planning to get ourselves ready for spring. Obviously, you cannot stop doing things at this point and time. We will continue to do workouts.”

Bartz is like a lot of coaches. He is waiting to see what limits the MHSAA will put on the teams as they prepare for their season.

Dowagiac Athletic Director Brent Nate said he, the coaches and the players are disappointed with the announcement.

“The first thought that comes to my mind is: how is this going to affect baseball and boys track?” he said. “The smaller the school, the more it will have an effect.”

Nate said he would like to focus on the positives, which is that there will be high school sports this fall.

“All other sports are moving forward,” he said. “We will follow the state’s full recommendations and proceed as directed.”

Niles Athletic Director Jeff Upton said that the MHSAA sent out a survey last Thursday which had yes and no questions like “would you be comfortable football games? Are you comfortable hosting soccer games? I answered yes, I am. They had a comment section. My comment was ‘nothing had changed since Monday.’ And if football, soccer and volleyball, which are the higher risk sports, if they were good to go Monday and Wednesday, why wouldn’t they be good to go on Thursday and Friday.”

Upton said it was breaking his heart to have to walk out to the practice field at 6 p.m. last Friday and tell the team the state’s decision.

“I am going to be out with our football coaches and notify all of our athletes, who have put in a tremendous effort all week on the practice field,” he said. “They have loved being with each other. That is what you want in high school sports.”

JEFFERSON TOWNSHIP — A search of a Jefferson Township residence has led to the arrest of a man in his... read more