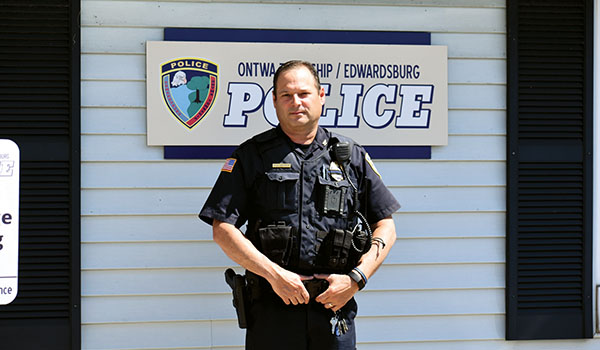 EDWARDSBURG — Thanks to the recent donation of a local business, Edwardsburg police officers can now set sail on the area’s lakes to promote boater safety.

Starboard Choice Marine, 68502 Dailey Road, Edwardsburg, recently donated a boat to the Ontwa Township/Edwardsburg Police Department. The boat, which has been outfitted with the department name and lights, will be used to patrol Edwardsburg’s lakes.

According to Starboard Choice Marine, the boat has a retail value of approximately $7,500. The boat is the first to be used by the department.

“We like working hand-in-hand with the police down here,” said Andy Peterson, co-owner of Starboard Choice Marine. “We know there has been a need, and we thought it would be a good thing for us to do to help them have a presence on the lakes.”

“I just want to thank Starboard Choice Marine. They stepped up to have the community, as they have in the past, and we hope we can return the favor by doing a good job for everybody,” Westrick said. “Starboard has always been very supportive of this department.”

The boat will be primarily used for boater safety, Westrick said. This summer, particularly on Edwardsburg’s largest lake, Eagle Lake, the department has received complaints of jet skis driving erratically and other improper lake practices.

“Our goal is not to write a bunch of tickets,” Westrick said. “Our goal is to train people and make sure they are boating and driving safely. … If we are out there, people are more likely to follow boater safety rules than if not.”

Westrick said the department has already begun using the boat with officers that have been trained in marine division. By next summer, he hopes to have additional officers trained in lake patrol.

“Right now, we are kind of getting our feet wet,” Westrick said. “We are working with the community and seeing what we can do for the community’s safety.”

Westrick said the boat and lake patrol would not take away from his department’s primary duties, including patrolling the land of the township and the village. Instead, he said the boat would be a useful tool that can be used when needed.

“I think it is a good thing to have in place,” Westrick said. “If it can stop just one person from getting hurt, it is a benefit to our department.”

EDWARDSBURG — One Edwardsburg couple’s desire to be their own bosses has led them on a journey to owning their... read more