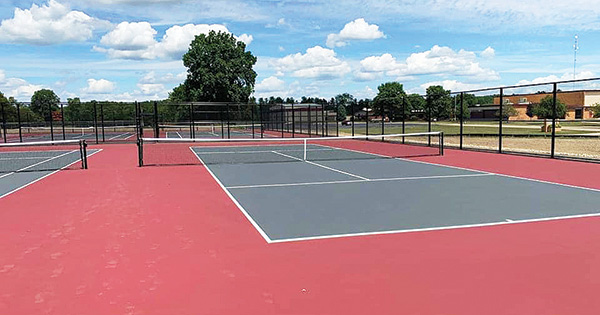 The Brandywine tennis team has a home of its own after the district built eight new courts next to its softball field. Brandywine has been playing at Plym Park for nearly three decades. (Photo courtesy Brandywine Athletic Boosters)

NILES — There was something different about the start of fall sports practice for the Brandywine boys tennis team on Wednesday.

Instead of piling into cars and heading into town to practice at the Plym Park, the Bobcats headed out to Brandywine High School to practice on their brand new courts.

The courts got the final approval for us on Monday, two days before the start of fall sports practice.

The boys and girls tennis teams have immediately begun using the courts. The boys are preparing for the upcoming season, while the girls are concluding their summer workout program.

Veteran Brandywine coach David Sidenbender was pleased with how they turned out.

“They are awesome,” he said. “It will be even better when we are in school and get to walk out the door and get to use them. They are set up really nice.”

Sidenbender liked the grey and maroon color scheme selected for the courts. He also said his players love the new facility.

“We feel kind of special,” he said. “Tennis hasn’t had anything for 25 years basically. They [the players] haven’t been here 25 years, but they know that we never had anything and how bad Plym Park is.”

Brandywine senior Caleb Byrd never thought he would get a chance to play on a tennis court at the high school.

“I had thoughts of it [a home tennis court], but not really,” Byrd said. “I love that they are here because it is close to home.”

Byrd agreed with his coach about the colors of the court, and that there are seven doubles courts and one singles court.

“I like how there are a lot of courts so we do not have to wait for every match,” he said. “I think it is going to be a good year for us too.”

Sidenbender believes that having courts at the high school will draw more interested to the program. In the past, it has struggled with numbers as younger players were unable to get a ride into town to play at Plym Park.

“I guarantee, just for that we will get a few more,” he said. “Plus, now PE [physical education} and junior high can do a tennis section. They can introduce it to them. Joe [Marazita] said he would do it for them. I also had Rich Robbins [girls assistant coach] said he would come out and do a junior high team for nothing.”

For now, Sidenbender and his team are focused on preparing for its season opener, which is scheduled for Sept. 2 when the Bobcats host Bridgman-New Buffalo in a BCS Conference match.