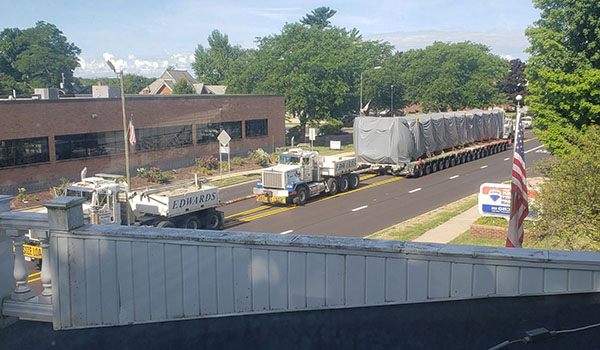 NILES — Over the last few weeks, every so often a convoy of heavy equipment comes through Niles. As it travels, it shakes the ground and stops traffic as Michigan State Police clear the way for huge equipment to travel through the main roads to its final destination at the Indeck Niles Energy Center site, 2100 Progressive Drive.

According to construction site manager Jamie Pike, the building of the energy center, which is projected on average to power 700,000 buildings, is about 15 percent completed.

“The project itself is about 40 percent complete overall,” Pike said. “For construction purposes, we are about 15 percent through the buildout. There are other factors that go into that number, as far as the engineering side and actually procuring some of the materials.”

The construction site has had miscellaneous goods arriving in town on normal transports, but the ones that tend to attract the attention of residents are what Pike calls “heavy hauls.”

The heaviest equipment is transported to the site in Niles from Edwardsburg and from Burns Harbor, Indiana.

According to Pike, each of these deliveries have been between half a million and three-quarters of a million pounds to transport.

“We’ve also had a series of tube bundles for our heat recovery steam generator, basically the big boiler,” Pike said. “They are about 75-foot tube bundles, and those are about 350,000 to 400,000 pounds on those trucks.”

Pike said typical transports are around 80,000 pounds, for comparison.

To transport loads of this magnitude, Indeck has had to work with the Michigan Department of Transportation on a plan the department has to approve.

“[MDOT] has to do a structural analysis on every bridge, culver and embankment they go over and see what the capacity is,” Pike said.

The “crawler,” the transport vehicle with around 160-wheels, distributes the weight of the heaviest loads to ensure the transport complies with MDOT regulations.

Of the heavy hauls, Pike said the site has about a 18 trips remaining. Most of those will be made over the next month, with one or two heavy haul trips slated for the end of the year.

“With a lot of this equipment showing up, it actually triggers our manpower loading when we start to ramp up,” Pike said.
Indeck’s construction crews will continue working through the colder months to keep the project on schedule.

Pike said COVID-19 has presented some challenges, but as critical, energy infrastructure, the construction has continued as normally as it can.

Another component for the energy plant is in the works with the city, according to David Hicks, vice president of business development with Indeck.

Hicks said the additional project will be much smaller than the current construction, but would be an addition to the city’s energy generation profile.

Currently, the Indeck Niles Energy Center is still on schedule. Pike believes the site will have a “substantial completion date” of March 2022.

“We’ve had challenges, some of the equipment is sourced worldwide, but normal project challenges of this magnitude as well,” Pike said. “It comes with the territory.”