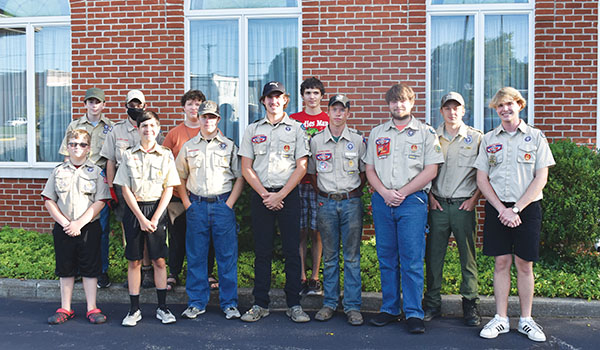 BUCHANAN — As the shadows began to grow longer in Buchanan, the laughter and friendly ribbing of boys between one another can be heard coming from outside of the First United Methodist Church, 132 S. Oak St. A half hour into meeting, Boy Scouts are helping crush cans to get them ready for recycling.

The members of Boy Scout Troop 541 met for its 6:30 p.m. meeting on Tuesday to discuss their plans for the weekend. They are preparing for the scouts’ High Adventure, where they will travel to Michigan’s Upper Peninsula to Pictured Rocks National Lake Shore and Tahquamenon Falls State Park for a backpacking and camping trip.

Despite big disappointments, like the Boy Scouts of America 2021 Jamboree being postponed, the troop’s scoutmaster, Bill Blumka, has helped lead the scouts to adapted adventures.

Assistant Scoutmaster David Guisbert estimated that between the 17 scouts and 14 adult leaders in the program at the summer camp the troop hosted at Dumont Lake, more than 100 merit badges were earned between the camp and online merit badge classes. He also said at least 12 ranks had been earned by the scouts.

The High Adventure opportunities are available to Boy Scouts 14 years of age and older.

Guisbert’s pride in the scouts shows through and he talks about how the troop has had to adapt and persist through the COVID-19 shut downs and mandates.

“I think it was around 225 hours total,” Mills said of his project. “I started in the fall, and it wasn’t completed until the spring because we had to wait until the ground thawed.”

“It’s part of a revitalization project to bring them back from, almost, the brink of extinction,” Mills said.

The project’s location, between the Buchanan Township Hall and fire department, had Mills involved with the process of getting approvals from a township board, permits and everything in between.

“It involves learning the skills and processes to enact change in the community,” Guisbert said.

“It was really hard to find lumber,” he said.

“I replaced the rotted wood and put up metal siding so that animals could not get through,” he said.

Placher is beginning his Eagle Scout service project, and is planning a 10-by-30 foot pavilion in Kathryn Park.

“I figured this could be something where people could come out of the buildings and still do activities,” Placher said. “They could have shade from the sun. I’ve been planning this sine I was 13. It’s something I wanted there.”

Another scout beginning the planning his Eagle Scout service project, Welch, is the youngest beginning to plan his project just before he turns 17.

“I plan on building a staircase on a very steep hill, and putting up a couple of benches,” Welch said. “It’s all near a previous project we did, called the Blumka Bridge named after our scoutmaster on the McCoy Creek Trail.”

He was inspired to install the staircase when he realized his mother was afraid to walk down the hill.

“I want to make it easier for people,” he said.

The scout with the least amount of time to complete his Eagle Scout Service Project is Borgman. His project involves parks in Buchanan neighborhoods.

“I plan to build some raised beds in two of the parks and plant some apple and cherry trees there,” he said. “It’s already been done in one park. The neighborhood takes care of the plants, and in turn, they can get the fruit. The animals benefit from it too.”

“I feel the pressure is well deserved,” Borgman said of the need to complete his project before he turned 18.

Achieving an Eagle Scout rank is an important goal for him to obtain, he said.