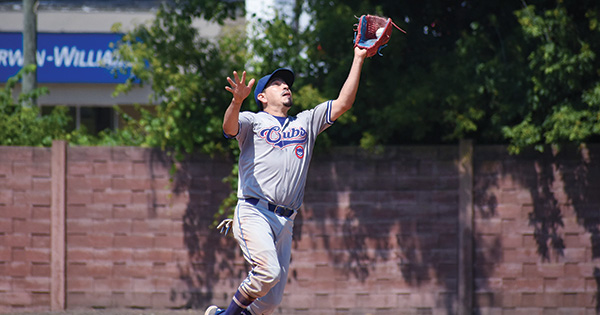 A member of Los Elkhart Cubs tracks down a blooper behind second base during action at Thomas Stadium on Sunday. The Cubs dropped an 8-3 decision to the Pop Flies. (Leader photo/SCOTT NOVAK)

NILES — The Diamond Jaxx improved to 2-0 on the Thomas Stadium Adult Baseball League season with a 7-3 win over the South Bend Opossums in a battle for first place Sunday afternoon.

The Jaxx, who sit atop the league standings by a half-game, got on the board first and never looked back as they scored six runs. The Jaxx extended their lead to 7-0 with a run in the second before the Opossums scored all three of its runs in the bottom of the third.

Deegan Huffman picked up the mound victory as he allowed no runs on two hits in three innings of work. He was also 2-for-3 at the plate.

A Three-run third inning helped the Pop Flies pick up their first victory of the season as they defeated Los Elkhart Cubs.

Chad Mitchell, Johnny Nate and Justin Grannell all drove in runs in the third inning for the Pop Flies, who are now 1-0-1 on the season.

Chad Barton started for the Pop Flies, and he allowed one run on two hits in three innings of work. Andrew Brawley was the winning pitcher as he gave up two runs on three hits in four innings of work.

Jorge Pizana was 2-for-3 to lead the Cubs. Steven Wisser suffered the loss on the mound.

The Niles Knights blanked the South Bend Expos 6-0 to earn their first victory of the season Sunday.

The Knights scored twice in the second and once in the fourth before exploding for three runs in the top-half of the seventh inning.

Niles (1-2) finished with 11 hits, including two each from Chad Adkerson, Anthony Kellman, Kevin Gross Jr. and Derek Anglero. Kellman and Adkerson both doubled.

Zac Hernandez went the distance for the Knights, tossing a two-hitter with eight strikeouts and one walk.

Dominick Romans and Montana Madison each singled for the Expos. Taylor Ort started and took the loss for South Bend. He allowed three runs on seven hits with three strikeouts.

The Black Mambas squared their record at 1-1-1 with a 2-1 win over the Great Lakes Grizzlies.

The Mambas won on a walk-off error by the Grizzlies in the bottom of the seventh.

Both teams struggled to put the bat on the ball as they combined for six hits. The Mambas had just two hits, but one of them was a solo home run by Wyatt Thornton. Jared Schlender added a single.

Schlender picked up the victory in relief of Thornton. The pair combined on a four-hitter with 11 strikeouts and one walk.

Matt Jewell led the Grizzlies with a 2-for-3 performance, which included a double.

Austin Juza, the third pitcher of the day for the Grizzlies, took the loss. He worked three innings, allowing two runs on two hits with nine strikeouts.

The Mob (1-2) had seven hits in the contest, including two by Elijah Williams. Alex Erwin and Noel Martinez both doubles for the Mob.

Erwin was the winning pitcher. He started and worked six innings, allowing two earned runs on seven hits with nine strikeouts and no walks.

The Steelheads also had seven hits. Joe Smith and Steven Justice both finished with a pair of hits. Smith also suffered the loss as he allowed three earned runs on six hits with 10 strikeouts and a walk.

CASSOPOLIS — The 2020 Cass County Fair may have been canceled, but Fair Board President Brian Kuemin wanted to find... read more