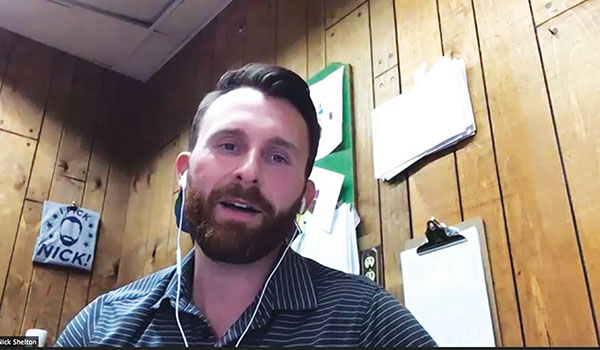 NILES — City council members maintained their power and internet connection as storms blew through the area during their regular Zoom meeting Monday evening.

Prior to the meeting beginning, there was a designated public hearing for the proposed Fiscal Year 2021 City of Niles Budget, which had no public comment included.

The council members had 12 items before them on their consent agenda and city administrator’s report.

The city council unanimously agreed to approve a moratorium on the city’s Revolving Loan Fund loan payments and interest until Jan. 1, 2021. The loan recipient will need to submit a written request to do so.

“The city of Niles has six revolving loans extended to small businesses in the city of Niles. The COVID-19 pandemic has made it difficult, if not impossible, for many of these businesses to make their scheduled payments,” said city administrator Ric Huff in his recommendations.

Approving the measure means the budget will be impacted by five months of interest lost, and a delay of five months for the payments.

The measure was passed unanimously by the council members.

Council member Dan VandenHeede, second ward, expressed his disappointment that no funding seemed to be going toward infrastructure, including roads and sidewalks.

“If we do infrastructure programs, we need to do very large ones,” Huff said. “They would be large portions of this money to be cost effective, in this particular case, because of the requirements and changes in the CDBG program, a lot of the dollars are being converted into local municipal response to COVID-19 issues.”

Huff said using the grant effectively for infrastructure would require the city to use between $200,000 and $250,000 to qualify for cost effective interest rates.

Council member John DiCostanzo, fourth ward, said he thought a visible difference would be made if cuts were made to the amount allotted for code enforcement in the CDBG.

“I think if we made a serious reduction in code enforcement efforts, there would be a very considerable difference in the city,” he said.

Also on the agenda were two items for Niles’ Dial-A-Ride Transportation. Upgrades in both a software utilized by DART and pay for employees were approved by the city council members.

A software upgrade putting ride schedules, invoices for fares and to compile reports for state and federal agencies was agreed to by the city council.

The PC Trans upgrade will allow DART to upgrade two tablets to use the program.

The city council passed a measure to increase employee compensation in the DART program as well.

“Currently, the city of Niles is in the bottom half of the public transportation wage survey,” Huff said in the item report. “We are competing for part-time drivers with area schools and private bus operators with starting pay in the rage of $15 to $16 per hour, with some offering additional benefits such as paid holidays and paid time off.”

DART had a reserve fund for unplanned expenses, so the raise will not impact the city’s budgeted payroll for fiscal year 2020.

The item that drew most discussion was the consideration to adopt a resolution to designate a social district and define a commons area in downtown Niles. The measure passed 7-1.

The Niles Main Street/Downtown Development Authority members will now move into next planning steps to get the social district ready with rules, regulations, signage, and business participation.

Immediately following the regular city council meeting, an ordinance meeting was hosted to discuss a secondary water supply ordinance to be reviewed at the next city council meeting on Aug. 24. The ordinance will add an additional layer of review and permitting to the process of tapping into the city’s water supply. Private wells are allowed in the city, but as an added layer of protection to the city’s water supply, the city proposed creating additional restrictions for developers and land owners to be able to create new well accesses, in the interest of protecting the city’s wells, according to Huff.